Keeping egg cells in stasis during childhood is a key part of female fertility. New research published today (1st January) in Nature Structural and Molecular Biology sheds some light on the role of epigenetics in placing egg cells into stasis. A team led by Dr Gavin Kelsey in the Babraham Institute and colleagues in Dresden and Munich studied a protein called MLL2 and discovered how it produces a distinctive pattern of epigenetic marks that are needed for egg cell stasis.

A fertilised egg cell is the start of every human life. Yet, egg cells are created inside a woman's body before she is born. The eggs are then kept in stasis throughout childhood until they're needed as an adult. If egg cells don't go into stasis they can't become mature eggs and they will never have the chance to form a new life. Putting an egg cell into stasis involves adding many epigenetic marks throughout its DNA. Epigenetic marks attached to DNA act as footnotes, indicating which genes are turned 'on' or 'off'. The scientists wanted to understand where these marks come from in egg cells and how mistakes can cause disease. It is particularly challenging to study epigenetics in egg cells as there are so few of them. The team had to create new, highly sensitive ways to detect epigenetic marks in such small numbers of cells.

Using this approach, they found that, as eggs develop, a mark called H3K4me3 spreads throughout the genome. Scientists have already seen the same mark close to the start of active genes in many cells, but the team discovered that its role in egg cells is different. They showed that the MLL2 protein is responsible for this unusual placement of H3K4me3 in egg cells. Without MLL2, most H3K4me3 marks in egg cells are lost and the cells die before getting the chance to form a new life.

Speaking about the results, first author Dr Courtney Hanna, said: "Our findings show that H3K4me3 is created in two ways. MLL2 can add the H3K4me3 mark without any nearby gene activity while another process, that doesn't use MLL2, places the same mark around active genes. By studying this new mechanism we hope to expand our knowledge of epigenetics in general as well as adding to our understanding of fertility." Lead scientist, Dr Kelsey, said: "We are only beginning to unravel the details of the connection between epigenetics and egg development, a fundamental aspect of biology that may play a part in transmitting information from mother to fetus. Discoveries like this highlight some of the unusual biological processes that take place in these highly important cells." 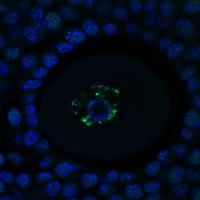