PROVIDENCE, R.I. (Brown University) -- When it comes to swimming, the bodies of some bacteria are more than just dead weight, according to new research from Brown University.

Many bacteria swim using flagella, corkscrew-like appendages that push or pull bacterial cells like tiny propellers. It's long been assumed that the flagella do all the work during swimming, while the rest of the cell body is just along for the ride. But this new research shows that in at least one species, the cell body is actively carving out a helical trajectory through the water that produces thrust and contributes to the organism's ability to swim.

"To our knowledge, this is the first time that it's been shown quantitatively how the cell body is involved in the swimming motion," said Kenny Breuer, professor in Brown's School of Engineering and the paper's senior author. "For the most part, people thought that the body didn't do very much—that it was literally just a drag on the cell—but here we show that it really contributes."

The findings will be published the week of July 21 in the Proceedings of the National Academy of Sciences.

Studying how microscopic bacteria swim requires some sophisticated imaging techniques. Traditional microscopes can only show so much. The creatures swim right through the field of view in a blink of an eye, revealing few details about how they're moving. For this study, the researchers used a method that enabled them to closely follow bacterial cells as they swim in real time.

The technique makes use of a tracking microscope built by Bin Liu, a former post-doctoral researcher at Brown and soon to start as an assistant professor at the University of California, Merced. The microscope is equipped with a mobile stage on which swimming bacteria are viewed. Once the microscope locks on to a bacterium, the stage moves according to the bacterium's movement, keeping the critter in the center of the microscope's view.

"The innovation in this paper, I think, is we follow single individuals for around 30 seconds, which is a long time in the bacterial sense—thousands of revolutions of a flagellum," Breuer said. "In most studies of bacteria, you look at lots of bacteria collectively and average them. But there's a tremendous scientific value to following a single cell. We can see how much cell-to-cell variation there is. We can see how much things vary over time and so on."

A body in motion

When Liu, Breuer and their colleagues watched crescentus swim under their microscope, they were surprised by what they saw.

"The first result, which we didn't believe at first, was that the bacteria go faster forward than they do backward," Breuer said. "We thought that couldn't be true because the physics says it should be exactly the same forward and backward. So we said, 'how can this be?' That's when we looked more deeply."

In taking that closer look, the researchers noticed that the cell body traces a wobbly, helical trajectory as it moves—a trajectory that looks a bit like the body is traveling though an invisible spiral tube. The spiral was less pronounced when the bacteria go in reverse compared to when they go forward. Using a mathematical model based on "resistive force theory", the researchers show that the thrust produced by the different body motions accounts for the differences in swimming speed. The bacterial body, it turns out, is more than just a docile passenger.

The finding could shed new light on the evolution of cell body shape, Breuer says.

"There are big questions as to why certain species have certain cell shapes," he said. "This might lead to some answers there."

The researchers also plan to use their imaging technique to look at swimming dynamics in other types of bacteria and in more complex fluids, like mucus.

"Real fluids like mucus or gel have complex properties and we want to continue this work into that realm," Breuer said. "All of this helps to explain how bacteria are adapted to swim in certain conditions and that has application to disease propagation and even to fertility, because a lot of this applies to sperm as well."

Breuer's and Liu's co-authors on the paper were Marco Gulino, Michael Morse, Jay Tang and Thomas Powers. The work was supported by the National Science Foundation (CBET-0854108 and CBET-1336638). 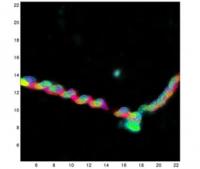 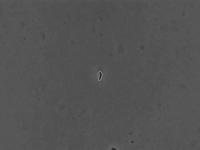