Tropical Storm Jose continued to spin south of Massachusetts when NASA's Aqua satellite flew overhead from space and captured an image of the large storm that hasn't moved much.

Because of Jose's close proximity to southern New England, the National Hurricane Center said that tropical storm conditions are occurring over portions of southeastern New England, today, Sept. 21. Also, high surf and rip currents expected to continue on the east coast of the United States.

A Tropical Storm Warning is in effect from Woods Hole to Sagamore Beach, including Cape Cod, Massachusetts. In addition to Block Island, Martha's Vineyard and Nantucket.

NASA's Aqua satellite flew over Tropical Storm Jose on Sept. 20 at 2 p.m. EDT (1800 UTC) when it was centered south of Cape Cod, Massachusetts. The Moderate Resolution Imaging Spectroradiometer, known as MODIS captured a visible light picture of the large tropical storm. The storm appeared to have a defined center of circulation. Visible and microwave satellite data showed that the storm was still producing well-defined convective bands on the north side of the circulation. Some of these outer bands were approaching the southern New England coastline.

On Sept. 21 at 3:30 a.m. EDT (0730 UTC) the Visible Infrared Imaging Radiometer Suite (VIIRS) instrument aboard NASA-NOAA's Suomi NPP satellite looked at Tropical Storm Jose in infrared light and found the coldest cloud tops and most powerful storms were located northwest of the center. Cloud top temperatures were as cold as minus 50 degrees Fahrenheit or minus 45.5 degrees Celsius).

At 8 a.m. EDT/AST (1200 UTC), the center of Tropical Storm Jose was located near 39.6 degrees north latitude and 68.1 degrees west longitude. That's about 150 miles southeast of Nantucket Island, Massachusetts. Maximum sustained winds remain near 60 mph (95 kph) with higher gusts. Gradual weakening is forecast during the next couple of days, and Jose is forecast to become post-tropical on Friday. The minimum central pressure recently reported by an Air Force reconnaissance aircraft is 982 millibars.

Jose is a large system. Tropical-storm-force winds extend outward up to 230 miles (370 km) from the center. A gust to 48 mph (78 kph) was recently reported at the Nantucket Airport. An unofficial observing site in Vineyard Haven on Martha's Vineyard recently reported a sustained wind of 39 mph (63 km/h) with a gust to 52 mph (83 kph).

The National Hurricane Center noted that "Jose is stationary, and the system is expected to continue to meander off the coast of southeast New England for the next several days."

Swells generated by Jose are affecting Bermuda and much of the U.S. east coast and will likely cause dangerous surf and rip current conditions during the next few days. 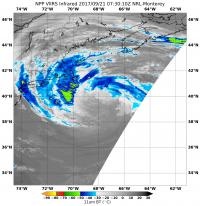