Almost 100 million euros has been spent so far on conservation efforts for the last 250 remaining Iberian lynxes in the wild. But the charismatic species is likely to go extinct within 50 years because the current management plans do not account for the effects of climate change. If they did, the population might increase instead concludes a new international study with participation from the Centre for Macroecology, Evolution and Climate at the University of Copenhagen. The study highlights the importance of integrating climate models in management plans for biodiversity.

"Our models show that the anticipated climate change will lead to a rapid and dramatic decline of the Iberian lynx and probably eradicate the species within 50 years, in spite of the present-day conservation efforts. The only two populations currently present, will not be able to spread out or adapt to the changes in time", explains Miguel Araújo from the Center for Macroecology, Evolution and Climate at the Natural History Museum of Denmark at the University of Copenhagen.

"Fortunately, it is not too late to improve the outlook for the endangered lynx, if the management plans begin to take account of climate change".

The Iberian lynx is threatened by poaching, road kills, habitat loss and lack of prey following a series of disease outbreaks in the rabbit populations. Therefore, significant investments are currently made to relocate rabbits, prevent diseases, reduce threats and improve the lynx's natural habitat. Unfortunately it is not enough, show new models that investigate how climate change will influence the availability of prey and quality of natural areas in the future.

The scientists also modeled two other scenarios for the Iberian lynx, both based on a future prospect for releasing individuals from breeding programs into wild areas. They paint a more optimistic picture for the lynx's survival, but the models clearly show that release programs also need to account for future climate change in order to achieve the best possible result.

While Spanish policymakers are considering releasing lynxes evenly across the country's autonomous regions, the scientists' models predict the most suitable areas to be in the northern half of the Iberian Peninsula. These areas could ultimately deliver both prey abundance and habitat connectivity in spite of climate change. According to the models it may increase the population up to nearly 900 individuals by 2090. In comparison, the geopolitical strategy will at best maintain the population around the current 250 individuals.

The study, recently published in Nature Climate Change, is the first of its kind to clearly demonstrate the importance of modeling climate change, prey availability and their interactions in the development of management plans.

Current efforts will not save the world's most endangered cat 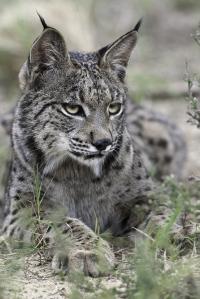