Bremerhaven, January 13th 2008. The German research vessel Polarstern is currently on its way to the Southwest Atlantic Sector of the Southern Ocean. The team of 48 scientists (30 from India) on board left Cape Town on 7th January to carry out the Indo-German iron fertilization experiment LOHAFEX (LOHA is Hindi for iron, FEX stands for Fertilization EXperiment). About two weeks will be required to reach the area and carefully select a suitable location, after which a patch of 300 square kilometres will be fertilized with six tons of dissolved iron. This will lead to rapid growth of the minute, unicellular algae known as phytoplankton. These algae do not only provide the food sustaining oceanic life, but also play a key role in regulating concentrations of the greenhouse gas carbon dioxide in the atmosphere. After about 45 days of interdisciplinary research, the expedition will end in Punta Arenas, Chile on 17th March 2009. LOHAFEX will provide more basic information to further our understanding of the role of ocean ecosystems in the global carbon cycle. It will help filling the gaps of knowledge mentioned by international conventions to classify the potential role of ocean fertilization as a means of reducing carbon dioxide concentrations in the atmosphere.

The scientific experiment is in accordance with the resolution of the London Convention on the regulation of ocean fertilization from October 2008 and the Decision of the Convention on Biological Diversity on ocean fertilization from May 2008 that call for further research to enhance understanding of ocean iron fertilization. For LOHAFEX, the National Institute of Oceanography (NIO), India, and the Alfred Wegener Institute for Polar and Marine Research in the Helmholtz Association, Germany, have evaluated possible environmental impacts showing that this experiment will not cause damage to the environment. The level to which the surface-water iron concentrations will be enhanced during this experiment is an order of magnitude lower than natural iron levels in coastal marine waters. This concentration is so low that most analytical laboratories in the world cannot measure it. The fertilized waters, although located offshore, have been previously in contact with the coast of South America and South Georgia and contain coastal plankton species that are adapted to high iron concentrations. The size of the fertilized patch is considerably smaller than the impact of melting icebergs that may leave a swath of several hundred kilometers breadth of enhanced iron concentrations. Therefore LOHAFEX will contribute legitimate and much needed scientific research to the controversial discussions on ocean fertilization.

Alfred Wegener Institute and NIO are jointly conducting LOHAFEX, together with scientists from nine other institutions in India, Europe and Chile. Prof. Victor Smetacek (Germany) and Dr. Wajih Naqvi (India) are co-Chief Scientists. The experiment is part of the Memorandum of Understanding between the two Institutes signed by the heads of their respective parent organisations, the Helmholtz Association, Germany, and the Council of Scientific and Industrial Research, India, in the presence of the Chancellor of the Federal Republic of Germany Dr Angela Merkel and the Prime Minister of India Dr Manmohan Singh in New Delhi on the 30th October 2007. Planning for the experiment has been underway since 2005.

The development and impact of the phytoplankton bloom on its environment and the fate of the carbon sinking out of it to the deep ocean will be studied in great detail with state-of-the-art methods by integrated teams of biologists, chemists and physicists. The design of the experiment is the same as that of previous experiments but more parameters will be monitored and the experiment will last longer. Five previous experiments carried out in the Southern Ocean, including two conducted from RV Polarstern in 2000 and 2004, have induced phytoplankton blooms of similar size and composition to natural blooms fertilized by iron in settling dust and from melting icebergs. However, in contrast to the remote oceanic regions previously fertilized, LOHAFEX will be located in a more productive region of the Southern Ocean inhabited by coastal species of phytoplankton. They grow faster and are more palatable to the zooplankton, including the shrimp-like krill, than their spiny open-ocean counterparts. Krill is the main food of Antarctic penguins, seals and whales but their stocks have declined by over 80% during the past decades, so their response to the iron-fertilized bloom (if they are present in the experimental area) will indicate whether the alarming decline is due to declining productivity of the region, for which there is evidence. The LOHAFEX patch will have a similar impact on the ecosystem as melting icebergs and is large enough to counteract the effects of dilution due to spreading over 45 days of the experiment.

Spending seventy days in a notoriously stormy stretch of ocean will be a strenuous experience for the scientists and crew on board Polarstern. Smetacek reports that bad weather was encountered shortly after leaving Cape Town, so many of the scientists are still adjusting to the movements of the ship. However, he is confident that this is a temporary phase and that soon everyone will be able to prepare the laboratories for the start of the experiments.

LOHAFEX is a contribution to POGO, the Partnership for Observation of the Global Oceans (http://www.ocean-partners.org).

Printable images and additional information can be found under: http://www.awi.de.

The Alfred Wegener Institute carries out research in the Arctic and Antarctic as well as in the high and mid latitude oceans. The institute coordinates German polar research and makes available to international science important infrastructure, e.g. the research icebreaker Polarstern and research stations in the Arctic and Antarctic. The Alfred Wegener Institute is one of 15 research centres within the Helmholtz Association, Germany's largest scientific organization. 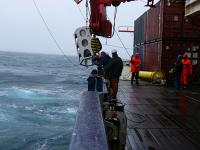