That visible light holds the character of a wave can be demonstrated in simple optics experiments, or directly witnessed when rainbows appear in the sky. Although the subtle laws of quantum mechanics, that is, wave mechanics, ultimately govern all the processes of electron transportelectrons in solids, their wave-like nature of the electrons is not often apparent to the casual observer. A classical picture of electrons as solid particles goes surprisingly far in explaining electric currents in metals. As high school students see in experiments with water waves, and we observe and use with light waves in many optical devices, interference is a fundamental property associated with wave-like behavior. Indeed, Davisson and Germer's famous observation of interference in experiments with dilute beams of electrons, nearly a century ago, gave key experimental support to the correctness of the then-new quantum theory.

In experiments on solids, however, signatures of quantum interference are rare and hard to observe. This is essentially because there are so many electrons, and so many ways in which they can be 'scrambled up', that most interference effects are invisible to experiments that probe distances of more than a few atomic spacings.

One of the themes of research in the Physics of Quantum Materials department is the study of exotic strange layered metals from a structural class with the equally strange name 'delafossites', stemming from the famous French crystallographer Gabriel Delafosse. They are notable because they conduct electricity incredibly well. Indeed, at room temperature one of them, PtCoO2, is the best electrical conductor ever discovered. As part of our research on the delafossites, we were studying how the conduction perpendicular to the layers depends on magnetic field, in crystals that had been sculpted into particular geometries using a focused ion beam (see Fig. 1). To our complete surprise, we observed strong oscillations in this conductivity, of a kind that are a signature of some kindsignaling of interference (see Fig. 2). After a long period of follow-up experiments at this institute and in the new group of our former colleagues Philip Moll and Carsten Putzke, now at EPFL in Lausanne, we collaborated with theorists Takashi Oka and Roderich Moessner in our neighbour institute in Dresden and Ady Stern from the Weizmann Institute in Israel to propose an explanation for what is going on. Remarkably, it requires a form of quantum coherence over macroscopic distances of up to 50000 atomic lattice spacings. It is only observable because of the remarkable purity of the delafossites, whose origin we established in another set of experiments, also published recently. High quality materials continue to hold a wealth of surprises and delights for those who make and study them! 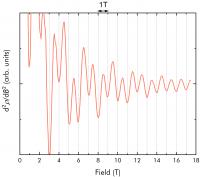