SYRACUSE, NEW YORK -- Debates about humane treatment of animals are commonplace when the species in question is a charismatic mammal such as a panda or a familiar, furry house pet. But what about invertebrates?

It turns out a beer can make a difference.

A scientist at the SUNY College of Environmental Science and Forestry (ESF) recently sought out the most humane way to end the lives of the tiny snails she is raising in a laboratory here.

The process is much like that used with domestic animals, when a veterinarian sedates a dog or cat before administering a final dose of a euthanasia drug.

"There are already strict protocols established for research with certain animals. You have to be sure they are not in pain and that they are treated humanely," said Cody Gilbertson, a graduate student at ESF, whose master's research (funded by the U.S. Fish and Wildlife Service Great Lakes Restoration Initiative) focuses on an endangered population of Chittenango ovate amber snails. "There's not much out there regarding the treatment of invertebrates.

"We looked at how to humanely euthanize invertebrates, especially land snails, as well as preserve tissue for research," she said. "We wanted to see if there was a way to minimize suffering and minimize the tissue damage that occurs when you put them straight into 95 percent ethyl alcohol. We aren't yet certain what pain these animals experience, but veterinarians can look for changes in tissue structure to better understand how the snails are reacting."

The study by Gilbertson and Dr. Jeffrey D. Wyatt, a veterinarian at Seneca Park Zoo in Rochester and a professor at the University of Rochester Medical Center, is the cover story in the September issue of the Journal of the American Association for Laboratory Animal Science. This is the first time a snail has been featured on the cover in the 24-year history of the journal.

The publication is part of Gilbertson's master's research, in which she is studying conservation of an endangered snail. The "Chit," as its called by its fans, is found only in one location alongside Chittenango Falls in Central New York. Gilbertson has achieved a crucial step in the species' recovery by breeding the snails in captivity in an ESF laboratory, and she is monitoring their population at the waterfall.

She has used an invasive species of snail to help test different diets for the endangered snails. Some of the invasive snails became so abundant they needed to be euthanized.

Traditional euthanization involves a lethal dose of ethyl alcohol (also called ethanol). Gilbertson said when the snails, which are less than an inch long, are dropped into a 95 percent solution, they show signs of physical stress: they quickly retract their tentacles, expel mucus and defecate. They retract deeply into their shells, making their tissue more difficult for researchers to access.

A preliminary dip in beer, however, specifically Pabst Blue Ribbon with its 4.74 percent alcohol content, or a five percent ethyl alcohol solution, gradually immobilizes the snails and makes them unresponsive to stimuli such as a needle scrape or prick. Left alone, they are back to normal in about an hour. But if, in that anesthetized state, they are dropped into 95 percent ethyl alcohol, they die quickly without reacting.

Gilbertson said she used beer in the research because it's inexpensive and available nearly everywhere.

Although unheralded in pop culture, snails perform essential ecosystem functions and are frequently involved in research projects. They are found in a range of environments -- dry, wet, tropical and temperate. They are a food source for many species and terrestrial snails provide other animals with a good source of calcium. They are part of the nutrient cycle, breaking down leaf litter into soil.

"Land snails can be indicator species," Gilbertson said. "If you are monitoring a native population and they start to decline, you know something might be degrading the habitat, which could influence other species' decline. Snails are like canaries in a coal mine."

Journal of the American Association for Laboratory Animal Science

Journal
Journal of the American Association for Laboratory Animal Science 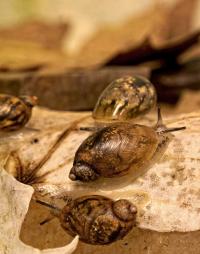