ResearchKit is an open source software framework designed specifically for medical research that helps doctors and scientists gather data more frequently and more accurately from participants using an iPhone. Since its launch two years ago, valuable data collected from the iPhones of patients with Parkinson's disease, breast cancer, and asthma who opt in to use these applications, has poured into medical centers investigating better ways to study and treat these diseases.

Developed by Misha Rosenbach, MD, an assistant professor of Dermatology in the Perelman School of Medicine at the University of Pennsylvania, and Daniel O'Connor, a fourth-year Penn medical student, in collaboration with Marc Judson, MD, at Albany Medical College as well as the Foundation for Sarcoidosis Research, the app will deliver informational resources to patients, supplying links to disease information and advocacy groups, and directing them to specialists in their area based on their phone's GPS. Patients will have the ability to opt in to a research study which can provide researchers with a trove of data about this rare disease. Optional, once-a-month surveys will query users about, for example, their symptoms and flare ups, how sarcoidosis affects their lives, and medications. The app will also optionally pull data naturally tracked through sensors on iPhone - from the weather to physical activity - to help the researchers spot any trends.

Among potential queries the technology will allow investigators to explore: When sarcoidosis is flaring, are patients walking fewer steps? Do they miss work? Does their disease flare after a week's worth of sunny days? Does geographic location affect symptoms? Is there a seasonal variability? How quickly do patients respond to treatments?

"There's a great opportunity that has never been done," Rosenbach said. "In traditional research, you can't see patients every day, but in app-based research you can suddenly get all this information about the disease in real-time and over time, from many different patients all over the world. It gives us the power to do sarcoidosis research in a way that has never been done."

One of the biggest challenges in medical research is numbers. Researchers are faced with a shortage of patients for clinical studies. Even in a more common research space like cancer, studies have shown only 3 to 5 percent of patients volunteer to participate. But it's especially hard in rare disease research because of a much smaller pool of patients. Sarcoidosis, which occurs in the lungs for about 90 percent of patients, is diagnosed in anywhere between 10 to 30 out of 100,000 Americans each year. It can affect nearly anyone, but disproportionately affects African Americans, particularly black women.

The largest study to date, the ACCESS trial (A Case-Control Etiologic Sarcoidosis Study), enrolled about 800 patients over a three-year period across 20 medical centers in the United States, and still failed to completely answer many critical questions, Rosenbach said.

"This new app has the potential to build up a larger cohort of more diverse patients in a shorter amount of time," he said. "There's a motivated and engaged group of sarcoidosis patients who are active online, but there's a whole host of them out there we don't know about. This app, which can securely, privately, and anonymously collect data, casts a wide net that may engage those people, and funnel valuable, much-needed information to researchers."

The exact cause of sarcoidosis is unclear, but many researchers agree it starts from an immune response to some foreign material trigger, such as an atypical infection. When the body encounters a foreign material that it can't fight off, it builds up a protective wall of inflammatory cells called a granuloma - lumps of cells. In sarcoidosis patients, this production never shuts off - it keeps going and going, resulting in numerous granulomas - that can damage organs, particularly the lungs.

With this project, researchers will determine whether the app is an effective method of studying the disease and collecting quality of life measurements used in today's conventional clinical studies. Survey questions to enrollees can be tweaked throughout the process, if necessary, as new data rolls in or input from health care leaders and the sarcoidosis community emerges.

Data gathered from the app, the researchers said, could impact how tomorrow's clinical studies are designed.

"We're excited about future opportunities to repurpose the app for other rare diseases, as well," O'Connor said. "With a strong app framework in place, 'sarcoidosis' could be swapped out for another disease, allowing wide networks of patients all over the country to participate in Penn studies without traveling to Philadelphia." 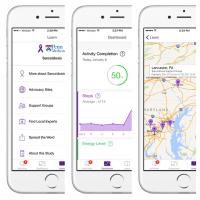