The physical interactions between coral and algal cells as they combine to form a symbiotic relationship have been observed for the first time. Within minutes of being introduced, coral cells had started to engulf the algae, where they were either digested or moved to a protective 'bubble' within the cell. This new study, published in Frontiers in Marine Science, will form the basis of further research to understand what drives their symbiosis at a cellular and molecular level, including the eviction of algae, which is the cause of coral bleaching.

"We watched coral cells develop pseudopodia - temporary arm-like structures - that were used to engulf the algae as early as 5 minutes after the two cells were mixed," explains Professor Nori Satoh, co-lead author of the study and head of the Marine Genomics Unit at the Okinawa Institute of Science and Technology Graduate University, Japan. "Once inside the coral cell, some algae were moved to a vacuole, a protective membrane-bound bubble, while others were broken up and digested."

Coral and algae have had a cooperative relationship for over 200 million years. Coral cells provide algae with shelter and the building blocks for photosynthesis. In return, the algae provide the coral with nutrients. When corals are stressed, the algae can be evicted, which turns the coral white. Linked to climate change and pollution, this coral bleaching can be devastating, with negative impacts on wildlife, tourism, fisheries, and coastal flood protection.

Experiments to understand the detailed mechanisms of algal symbiosis with stony reef-building corals have proved difficult in the past, but Satoh and Kawamura recently succeeded in growing stable cell cultures of Acropora tenuis, a coral species widespread across Asia. The researchers introduced dinoflagellate algae to these laboratory-cultured coral cells to understand what happens in the initial stages of coral and algal symbiosis.

"Our study was designed to understand at the single cell level what occurs in the process of symbiosis and what may cause this symbiosis to cease," says co-lead author Prof Kaz Kawamura from Kochi University, Japan.

Several minutes after they were introduced, the corals cells started to move faster and actively incorporate the dinoflagellate algae within their cells.

"We were able to directly observe the interactions and symbiosis with video and confirmed what we saw by preserving the cells in plastic resin and taking semi-thin sections to show the engulfment of dinoflagellates inside the coral cells," explains Kamamura. "We also noted that the coral cells that had incorporated algae gradually became round and less mobile and that their symbiosis lasted for at least a month."

Future research will build on this study to help us understand how corals recognize, take up and maintain their algal endosymbionts.

"Our laboratory-based system of coral cells and algae may ultimately provide methods that we can use for the preservation and conservation of coral reefs," says Satoh.

Satoh adds, "We have already prepared comprehensive gene information of both the coral Acropora tenuis and dinoflagellate algae. This will be especially useful for future studies of cellular and molecular mechanisms involved in their symbiosis."

When corals meet algae: First stages of symbiosis seen for the first time 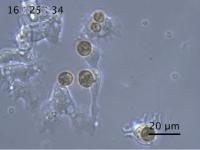