On Sept. 21 at 11:25 a.m. EDT (1525 UTC), the MODIS instrument or Moderate Resolution Imaging Spectroradiometer aboard NASA's Terra satellite took a visible picture of Jose. The image showed Jose's clouds in the northwestern quadrant continued sweep over southern New England, southeastern New York, and northeastern New Jersey. Jose is a large storm and the clouds in its northeastern quadrant are just south of Nova Scotia, Canada. Tropical-storm-force winds extend outward up to 220 miles (350 km) from the center.

Jose formed on Sept. 2 and has been around 20 days. The National Hurricane Center issued their 68th advisory on Jose on Sept. 22.

At 5 a.m. EDT, National Hurricane Center (NHC) forecaster Zelinsky noted "Since the last advisory, a small burst of deep convection has been observed near the center of Jose. The cyclone is still embedded within a dry environment and located over cold sea surface temperatures, so it will be a little surprising if the convection is maintained for an extended period of time this morning."

NASA's Aqua satellite observed Jose in infrared light on Sept. 22 at 2:40 a.m. EDT (6:40 UTC) that provided temperatures. The coldest clouds were the strongest storms. The Moderate Resolution Imaging Spectroradiometer or MODIS instrument aboard NASA's Aqua satellite found two areas where cloud top temperatures were coldest and as cold as minus 50 degrees Fahrenheit (minus 45.5 degrees Celsius).

Those areas of coldest cloud tops and strongest storms were located in Jose's northeastern quadrant around the center of circulation and in a fragmented band of thunderstorms that stretched from New Jersey to western Massachusetts and northeast to southeastern Maine.

The post-tropical cyclone is moving slowly toward the west near 2 mph (4 kph). Jose is expected to meander well off the coast of New England for the next several days. Maximum sustained winds are near 50 mph (85 kph) with higher gusts. Gradual weakening is forecast for the next 48 hours. The estimated minimum central pressure is 993 millibars.

Minor coastal flooding is possible along portions of the coast of southern New England during the next few days. Swells generated by Jose are affecting Bermuda and much of the U.S. east coast, and will likely cause dangerous surf and rip current conditions for the next couple of days in these areas

All of the dynamical models remain in good agreement that Jose will remain trapped in weak steering flow while gradually spinning down for the next several days. 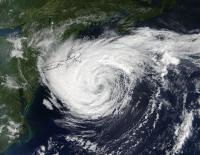