The research team have successfully developed TRPV2 knockout (TRPV2KO) mice, and demonstrated that TRPV2 is expressed in brown adipocytes and that mRNA levels of thermogenic genes are reduced in both cultured brown adipocytes and BAT from TRPV2 KO mice. The induction of thermogenic genes in response to β-adrenergic receptor stimulation (downstream of the sympathetic nerve activation), which usually causes thermogenesis, is also decreased in TRPV2KO brown adipocytes. In addition, TRPV2KO mice have more white adipose tissue and larger brown adipocytes, and can not keep constant body temperature of around 37 degree C upon cold exposure at 4 degree C. Furthermore, TRPV2KO mice have increased body weight and fat upon high fat diet treatment (Figure 1), which can be explained by the low thermogenic ability of TRPV2KO mice. Based on these findings, they conclude that TRPV2 has a role in BAT thermogenesis as shown in the model shown in Figure 2 and could be a target for human obesity therapy.

The novelty of this study

2. Mice lacking TRPV2 are prone to be obese upon high fat diet treatment.

The significance of this study

Mice lacking TRPV2 show impaired BAT thermogenesis and are prone to obesity on high fat diet. Activation of TRPV2 in BAT therefore could be an intriguing approach for human obesity prevention and treatment. 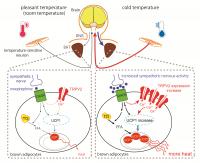