NASA satellites are amazing examples of technology. The TRMM satellite peers into tropical cyclones and can tell how much rain is falling per hour and where. QuikScat uses microwave technology to measure Ida's surface wind speed. The GOES-12 satellite, operated by NOAA, produces stunning visuals that are now made into movies by NASA. Both of these satellites have provided the latest views of Tropical Storm Ida today.

Since this morning Ida weakened to tropical storm strength as a result of wind shear (winds blowing at different levels of that atmosphere that can tear a storm apart) and cooler waters. Tropical cyclones need sea surface temperatures of 80 degrees Fahrenheit or warmer to maintain strength.

NASA satellites have helped forecasters see that much of the rainfall and cloud cover are north of the storm's center.

The Tropical Rainfall Measuring Mission (TRMM) satellite flew over Ida earlier today November 9, at 1217 UTC (7:17 AM EST) just before she dropped down from hurricane status. TRMM data showed Scattered convective thunderstorms are shown producing moderate to heavy rainfall of over 50 millimeters per hour (~2 inches) north of the storm and in a strong band on the eastern side. At that time Ida had winds estimated at 70 knots (~80.5 mph), they've since dropped.

This morning's TRMM overpass showed that most of the deep convection (rising air and developing thunderstorms) has been sheared off by wind shear, and pushed northeast of the center of circulation. TRMM showed only a small area of convection around the center.

At 1 p.m. ET, Tropical Storm Ida still had maximum sustained winds near 70 mph, and it was moving north-northwest near 18 mph. Ida is going to turn north, then north-northeast over the next 24 hours. That means, that Ida's center is expected to make landfall along the northern Gulf coast Tuesday morning. The latest minimum central pressure reported by an air force reconnaissance aircraft was 992 millibars.

NASA's Quick Scatterometer satellite (QuikScat) observed Ida's winds by using microwaves to peer into the clouds. QuikScat can determine the speed of the rotating winds within the storm at the surface of the ocean. From a pass this morning at 6:23 a.m. ET, QuikScat confirmed that tropical storm force winds extend outward up to 200 miles from Ida's center. The National Hurricane Center's discussion noted that "A QuikScat pass around 12 UTC (7 a.m. ET) showed winds of 50-55 knots in the core...and assuming that the instrument did not quite resolve the maximum wind speed...the advisory intensity will be set to 60 knots."

The third satellite keeping an eye on Tropical Storm Ida, is the Geostationary Operational Environmental Satellite, GOES-12. GOES-12 captured Ida's movement over the last couple of days and the GOES Project at NASA created a movie of her tracks.

The GOES Project at NASA's Goddard Space Flight Center in Greenbelt, Md. uses the data from the National Oceanic and Atmospheric Administration's Geostationary Operational Environmental (GOES) satellites to create images and movies. In this case, GOES-12 provided the data to make a movie of Ida's' movements from November 7-9, 2009.

While NASA satellites continue to watch from space, local hurricane statements (mostly tropical storm warnings) are in effect on the ground for residents of the Gulf coast from the Florida panhandle west to New Orleans and Baton Rouge, Louisiana. Those areas and northward into the eastern Tennessee Valley and southern Appalachians can expect 3 to 5 inches of rainfall, with isolated totals of 8 inches.

Tonight, however, residents along the immediate Gulf coast need to be done with preparations for storm surge. The National Hurricane Center noted that "Large and destructive waves will accompany a storm surge of 3 to 5 feet near the point of landfall."

Ida is predicted by the National Hurricane Center in Miami, Florida to hit the Gulf coast near Pensacola, Florida on Tuesday morning. Ida is expected to start its transition to non-tropical status after making landfall, and will then turn east.

For higher resolution movies from the GOES satellites, go to http://gsfc.nasa.gov/.

NASA satellites make a movie and get rainfall, wind info on Ida 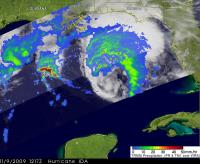 Ida's Rainfall from the TRMM Satellite 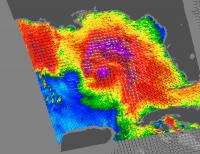