Imagine you are flipped upside down and standing on your head. After a few seconds, you would feel pressure in your head due to an increased blood flow. Humans and other vertebrates are known to have physiological reactions to gravity with reactions increasing with body size.

A new study by Jake Socha, professor in biomedical engineering and mechanics in Virginia Tech's College of Engineering, published in in the Proceedings of the National Academies of Sciences journal, "Physiological Responses to Gravity in an Insect" shows that insects experience similar physiological effects of gravity.

With Jon Harrison, professor of environmental physiology at Arizona State University, and undergraduate, graduate, and postdoctoral students, Socha assessed the effect of gravity on insects and discovered an active response called functional compartmentalization.

To determine the effect on Schistocerca americana, commonly known as the American grasshopper, the team analyzed X-ray images at Argonne National Laboratory to observe their internal systems. In some images, the grasshoppers were head-up, and in others the grasshoppers' heads faced the ground.

"No one expected that a small insect would have any type of response due to their gravitational orientation," Socha said, who is also the director of Virginia Tech's BIOTRANS, an interdisciplinary graduate team of biologists and engineers who work together to study transport in environmental and physiological systems. "This project started by seeing some weird things in X-ray images and asking questions."

Their discoveries indicate that the pressure of gravity may affect the insect's body and its bodily systems, just as in humans. This is counterintuitive to scientific thought and could have larger implications in future research.

Socha compared this effect to diving into a deep swimming pool. As a person dives lower down into the water, there is more pressure. This same concept applies to the grasshopper's body. The part of the body that is lower, or beneath the rest of the body, has higher blood pressure and thus, the air sacs are compressed.

However, when the insect is awake, the response is different. The air sacs change less in response to orientation. To further analyze this active response, called functional compartmentalization, the researchers further examined the grasshopper.

"Our findings suggest that animals had control of the inside of their bodies," Socha said. "Earlier this year, we published a paper with a similar finding. We analyzed beetles and found they had active body responses to compensate for forces on their bodies. So, we were interested in the other physiological responses of other animals."

Grasshoppers and other insects have open circulatory systems, which means that their blood is not contained in closed arteries or veins. Classic understanding of open circulatory systems is that blood flows freely within the body, like liquid in a bottle, and that pressures inside the body would all be similar. The research team discovered that these insects, in fact, could separate, or alter, internal body pressures with a flexible valving system.

"This was remarkable," Socha said. "We had been seeing odd occurrences in X-rays, so we had ideas that something was going on. Finding this gave us the evidence to conclude that grasshoppers do have a mechanism to counteract gravity, which is counterintuitive to most scientists."

The researchers also found that grasshoppers' heart rates change with orientation just as observed in humans. Humans sometimes feel dizzy when standing up too quickly because gravity impedes blood flow to the brain; fast-acting reflexes cause the heart to pump harder to overcome this gravity effect.

Even though insects do not have a closed circulatory system with veins and arteries, most insects typically have a tube-like heart. These researchers found that the grasshopper's heart rate would slow when head-down and beat faster when head-up, thus providing more evidence to point to insects' systems not only being affected by gravity but having active, physiological responses to compensate for gravity's effects, contrary to scientific prediction.

"We have multiple indicators pointing to the grasshoppers responding to its body orientation," Socha said, also an affiliate faculty member in Virginia Tech's biological sciences and mechanical engineering departments. "They respond physiologically to its orientation relative to gravity and have mechanisms inside its body to be able to deal with it. Grasshoppers are able to change their heart rate, respiratory rate, and functionally compartmentalize their bodies to control pressure."

Other Virginia Tech researchers collaborating on the project include Hodjat Pendar, research assistant professor in biomedical engineering and mechanics, and Khaled Adjerid, previously a doctoral student in the department. 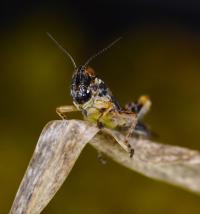