Algae might seem easy to ignore, but they are the ultimate source of all organic matter that marine animals depend upon. Humans are increasingly dependent on algae, too, to suck up climate-warming carbon dioxide from the atmosphere and sink it to the bottom of the ocean. Now, by using a combination of satellite imagery and laboratory experiments, researchers have evidence showing that viruses infecting those algae are driving the life-and-death dynamics of the algae's blooms, even when all else stays essentially the same, and this has important implications for our climate.

According to results reported in the Cell Press journal Current Biology on August 21, a single North Atlantic algal bloom, about 30 kilometers in radius, converted 24,000 tons of carbon dioxide from the atmosphere into organic carbon via a process known as carbon fixation. Two-thirds of that carbon turned over within a week as that bloom grew at a very rapid rate and then quickly met its demise. A closer look at those algae revealed high levels of specific viruses infecting their cells.

To put it in perspective, Assaf Vardi of the Weizmann Institute of Science in Israel says that this patch of ocean fixes about as much carbon as an equivalent patch of rainforest and then almost immediately turns much of it over.

"This is, of course, only one patch out of numerous co-occurring patches in other parts of the Atlantic Ocean," adds Ilan Koren, also of the Weizmann Institute, not to mention those algal blooms that appear in other seasons and ecosystems. "While the impact that viruses have on the entire ecosystem was previously estimated to be very large, we provide the first approach to quantify their immense impact on open ocean blooms."

Important questions remain about the ultimate fate of all that carbon taken in by algal blooms, the researchers say. Much of it is probably recycled back to the atmosphere by bacteria. But it's also possible that the virus-infected algae release sticky sugars and lipids, leading their cells and the carbon within them to sink faster to the ocean floor.

"If the latter scenario is true, it will have a profound impact [on] the efficiency of carbon dioxide 'pumping' from the atmosphere to the deep ocean," Vardi says. "This carbon will then have a better chance [of being] buried in the ocean sediment."

The findings will improve models that predict the future of algal blooms and their impact on climate. They also serve as a reminder that sometimes it really is the little things that matter.

"These interactions begin when one virus infects one cell, but they end up causing the collapse of massive blooms that span thousands of kilometers," Koren says. "These life-and-death interactions on the micro scale have huge importance on the large scale and vice versa." 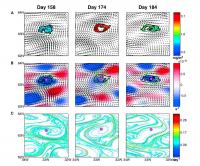