Abu Dhabi, UAE, December 10, 2020: A team of researchers from the NYU Abu Dhabi's (NYUAD) Smart Materials Lab (SML) led by Professor of Chemistry Panče Naumov has conducted a thorough review of the scientific literature surrounding the natural production of light, called bioluminescence, and developed conclusions that will help others in the field direct their research to uncover the mysteries behind this fascinating natural phenomenon.

In the new study The Elusive Relationship Between Structure and Color Emission in Beetle Luciferases, which is featured on the cover of the journal Nature Reviews Chemistry, Naumov and colleagues provide the most comprehensive critical overview of the field of the bioluminescence of beetles, including fireflies, to date.

The NYUAD researchers, including the Naumov group's post-doctoral associates César Carrasco-López and Stefan Schramm, and undergraduate student Nathan M. Lui, identify the intricate structural factors that govern what color light is emitted by wild-type and mutant luciferases, the enzymes that generate light. They also demonstrate that it is possible to build a library of bioluminescent enzymes in the future, which will enable researchers to control the color and intensity of light emission by engineering luciferases at will.

"Learning from nature will provide us with tools to engineer luciferases that can emit colors within a large range of energies," said Naumov. "This will eventually help us expand the range of application of these and similar enzymes for some exciting applications in biology and medicine, including early diagnosis and prevention of diseases."

Throughout human's history, bioluminescence has been an inspiration to scientists, artists, and laypersons. Glowing fungi or ostracods have been used by tribes and soldiers as lanterns to guide their way through jungles without the need of electricity, and fireflies were used by miners as safety lights.

The Nobel Prize in Chemistry in 2008 was awarded for the discovery of the green fluorescent protein, a bioluminescent protein found in the jellyfish Aequorea victoria. Today, bioluminescence is the basis for a great number of bioanalytical methods, such as cell imaging, cancer research, and control of food contamination, and a way to efficiently convert the energy stored in chemical bonds into light that can be easily detected. For example, bioluminescence of some bioluminescent bacterial strains is used to monitor water toxicity and contamination. The fluorescent proteins are genetically inserted into cells and animals to analyze important aspects of dynamics of some diseases.

The latest research from the NYUAD's Naumov team is poised to solve some of the mysteries surrounding the chemistry of bioluminescence and to bring this research closer to applications.

Image caption: A female glowworm of the Lampyris beetle, glowing green-yellow light. The insect was photographed by Meri Aleksov. 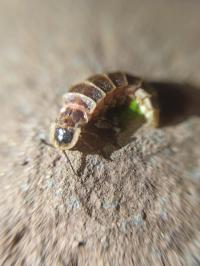 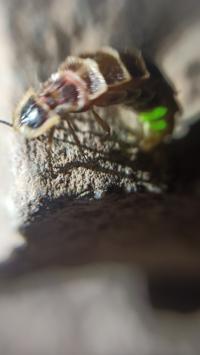