BLOOMINGTON, Ind. -- Leslie checked her Facebook profile late one day and discovered that she was suddenly single. Her now ex-boyfriend had met someone new and she learned this through the ubiquitous news feed that presented her personal rejection like a breaking news story.

When he changed his Facebook profile, he also changed hers as well -- they were no longer announced as a couple. Their friends received the news before she had.

There are now many more ways to break up -- both in public and in private -- and many of them are virtual.

Leslie was one of 72 people that Ilana Gershon, an assistant professor in the Department of Communication and Culture at Indiana University Bloomington, interviewed at length for her new book, The Breakup 2.0: Disconnecting Over New Media (Cornell University Press).

"I was interested in the ways in which people were using new media to break up with each other and also the ways in which new media -- which is designed to create connections -- creates all sorts of problems when you're using it to disconnect," Gershon said.

"Almost everyone still thinks that people should break up face-to-face," Gershon said. "The only people I interviewed who thought that face-to-face was less than ideal would imagine that they were the ones doing the breaking up, not that they were being dumped.

"But the thing that surprised me is that breaking up by talking on the phone is now much more acceptable than it was 15 or 20 years ago," she added. "Because you have all these different options for ending relationships -- texting, instant messaging, Facebook, e-mail, Twitter -- having an actual spoken conversation, even if it isn't face-to-face, is now widely seen as acceptable."

Of the people she interviewed, 67 were people who communicate frequently with new technologies, undergraduate college students. "I'm surrounded by a group of people that are breaking up fast and furiously and they were the ones ready to talk to me," she quipped.

But the stories Gershon heard were much more sophisticated than simply "he texted me" or "she sent me an e-mail." People she spoke to did a lot of "media switching" and made use of many forms of new media in order to look for reasons behind the breakup and even continue to follow former lovers' lives online. She said there are various things that can be learned from each form of communication.

For example, a 30-something man she interviewed learned that his wife wanted a divorce through a two-sentence e-mail while he was away on a business trip. In the meantime, she had emptied their joint bank accounts and he had no place to stay upon his return. Afterwards, she kept e-mailing his work account rather than having direct conversation. She ignored all of his notes he sent to her personal e-mail account.

"He began to pay a lot of attention to the e-mail account the messages were coming from," Gershon recalled. "He began to try and figure out what was going on. He learned that she had been experimenting with trying to have different personalities online. She had practiced being a different person on her Facebook profile," she added. "He also figured out through the technology, in part, that this other person (with whom she was having an affair) was at her workplace."

The boundaries were clear: He was no longer allowed to contact her personal account or interact with her during her personal time.

"People really are using all the ways in which these technologies give them access to different kinds of information about what's going on, to try and figure out what's going on," Gershon said. "What I find really interesting about the break-up stories is that they were really detective stories."

Some people told Gershon they figured out who their former lovers were seeing by checking their Netflix queues and matching them against the movies that their suspected new lover listed as their favorites on Facebook. She also found a great deal of "Facebook stalking" and Google searching -- by people on both sides of the failed relationship -- to discern how "their exes were feeling about what happened and the aftermath."

"I think that a lot of what I recorded were people who were doing the stalking themselves, in ways that they would not be noticed. If they knew that someone could tell that they were doing that kind of stalking, they'd be very uncomfortable ... People talked a lot about constantly getting information and doing a lot of monitoring in the aftermath."

Gershon also talked to people about decisions they had to make after a breakup, such as what to do with online traces of the relationship -- pictures of the couple and their wall posts on Facebook, the cell phone number and special ringtones.

"People used to have to make similar decisions -- do you burn the letters or not? But now they are making decisions about traces that they might encounter on a daily basis whenever they contact other people, not just the ones they can stick in a box somewhere and decide about later," she said.

She dedicated a chapter to what it means to speak in public today and sees differences developing in the way these new technologies are seen and accessed. For example, this argument recently has been played out through public discussion of Facebook and the privacy of its users.

"There's this real divide between people who are imagining an anonymous audience and people who imagine an audience over which they control access," she said.

Since beginning her research, which also appeared earlier in Anthropology Today, Gershon has been asked whether her work provides conclusions about whether using social media and other new forms of communication is healthy for relationships.

"What they're looking for are rules and my research did not produce rules," she said. "There's only one rule that I really feel comfortable with after all of my interviews, which is don't share passwords. If you're sharing passwords, change them the minute you think a breakup is about to happen. I know that now."

'The Breakup 2.0': A look at how new media is used to end relationships 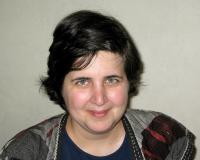