Trees in a hyper-diverse tropical rainforest interact with each other and their environment to create and maintain diversity, researchers report in the Oct. 24 issue of the journal Science. This study was conducted in the Yasuni forest dynamics plot of the Pontificia Universidad Católica del Ecuador, the most diverse tropical forest site associated with the Center for Tropical Forest Science/Smithsonian Institution Global Earth Observatory network (CTFS/SIGEO).

It is difficult to determine the effects of climate change, habitat fragmentation and species extinctions on life's diversity without a coherent model of how communities are organized; but a unified theory of diversity patterns in ecological communities remains elusive. The most complex biological systems—such as tropical rainforests—are the most important testing grounds for theories that attempt to generalize across ecological communities; as they pose the greatest challenge. At Yasuni, in addition to the 600 species of birds and 170 of mammals, there are approximately 1,100 species of trees in the 25 hectare plot―more than in all of the U.S. and Canada, combined.

In 2001 Stephen Hubbell, a scientist at the Smithsonian Tropical Research Institute and professor at the University of California, Los Angeles proposed a neutral theory of biodiversity based on more than 20 years of data from the original long-term forest dynamics plot on Barro Colorado Island, which he co-founded in 1980. The methods that Hubbell and his colleagues at the Smithsonian established to study tropical forests in Panama were so useful that other institutions worldwide adopted the same methodologies. The plot in Ecuador was established in 1995 by researchers from the Universidad Catolica, Aarhus University in Denmark and the Smithsonian in Panama.

"The global reach of the CTFS/SIGEO forest monitoring network, and the power to test theories of biodiversity depend entirely on independently motivated researchers who study trees in places from Yasuni to Papua New Guinea, on the other side of the world," said Eldredge Bermingham, director of the Smithsonian in Panama.

Neutral theory rests on the assumption that all species are equal in terms of their ability to survive and reproduce. Chance events drive change. This study supports an alternative, older explanation that characteristics of individual species play an important role in determining the structure of the community, contributing to the maintenance of biodiversity through distinct strategies.

"If the neutral theory is correct, we would expect these traits to be distributed at random throughout the forest, but that was not the case," explained RenatoValencia, professor at Pontificia Universidad Católica del Ecuador and lead investigator at the Yasuni forest plot.

Nathan Kraft, PhD candidate at the University of California, Berkeley, measured and compiled traits of the leaves, seed and wood of trees at Yasuni and then used detailed maps from the plot to look at how these traits are distributed across the forest.

"The traits we measured give us important clues about the strategy of each species in the forest —how they make a living, if you will. One exciting thing that we found is that trees growing near each other in basically the same habitat, may employ very different strategies," Kraft explained.

More research will be needed to resolve these conflicting views, and participants in the CTFS/SIGEO network of more than 30 forest dynamics plots in 17 countries hope that researchers will take advantage of standardized life-table data from more than 6,500 tree species to understand the patterns of biological diversity across the world.

The Smithsonian Tropical Research Institute, headquartered in Panama City, Panama, is a unit of the Smithsonian Institution. The Institute furthers the understanding of tropical nature and its importance to human welfare, trains students to conduct research in the tropics and promotes conservation by increasing public awareness of the beauty and importance of tropical ecosystems. http://stri.org/ 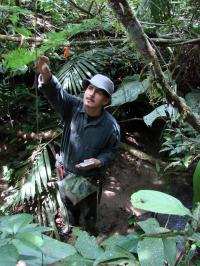