Now, latest research on marathon runners using finger length as a marker for hormone exposure shows that people who experienced higher testosterone in the womb are also better at distance running - a correlation particularly strong in men, although also present in women.

Researchers say the finding that males with greater "reproductive potential" from an evolutionary standpoint are better distance runners suggests females may have selected for such athletic endurance when mating during our hunter-gatherer past, perhaps because 'persistence hunting' - exhausting prey by tirelessly tracking it - was a vital way to get food.

Distance running may also have acted as a positive 'signal' for females of desirable male genetics more generally, say researchers: good runners were likely to be better persistence hunters and consequently better providers. This increases the likelihood they would have other key traits of good providers such as intelligence and generosity.

The study was conducted by researchers at the University of Cambridge's Division of Biological Anthropology and is published today in the journal PLOS ONE.

"The observation that endurance running ability is connected to reproductive potential in men suggests that women in our hunter-gatherer past were able to observe running as a signal for a good breeding partner," said the study's lead author Dr Danny Longman.

"It was thought that a better hunter would have got more meat, and had a healthier - and larger - family as a consequence of providing more meat for his family. But hunter-gatherers may have used egalitarian systems with equal meat distribution as we see in remaining tribes today. In which case more meat is not a factor, but the ability to get meat would signal underlying traits of athletic endurance, as well as intelligence - to track and outwit prey - and generosity - to contribute to tribal society. All traits you want passed on to your children," he said.

Using the largest sample of marathon runners of any study of its kind, Longman and colleagues tested for specific finger lengths known as the 2D:4D digit ratio. Previous studies have showed that those exposed to more prenatal testosterone have a longer ring finger (4th digit) in comparison to their index finger (2nd digit).

This digit ratio is the most accurate known way to tell if an adult was exposed to higher levels of testosterone as a foetus - a proven predictor of the "potential for reproductive success" in men, say researchers.

The team analysed 542 runners (439 men; 103 women) at the Robin Hood half marathon in Nottingham by photocopying hands and taking run times and other key details just after runners crossed the line.

The correlation was also found in women, but was much more pronounced in men, suggesting a stronger evolutionary selection in men for running ability. The 10% of women with the most masculine digit ratios were, on average, 11 minutes and 59 seconds faster than the 10% with the least masculine.

Longman points out that prenatal testosterone exposure is a very small influence on running ability that doesn't compete with training and muscle strength when it comes to performance, but their unprecedentedly large sample size of over 500 people enabled the team to gather conclusive evidence.

"Humans are hopeless sprinters. Rabbits, for example, are much faster sprinters, despite being fat and round. But humans are fantastically efficient long-distance runners, comparable to wolves and wild coyotes," said Longman.

"We sweat when most animals would overheat; our tendons and posture are designed to propel our next strides - there was likely a selective pressure for all these benefits during our evolution."

Persistence hunting is thought to have been one of the earliest forms of human hunting, evolving approximately two million years ago, said Longman.

"You can still see examples of persistence hunting in parts of Africa and Mexico today. Hunters will deliberately choose the hottest time of day to hunt, and chase and track an antelope or gnu over 30 to 40 kilometres for four or five hours. The animal recovers less and less from its running until it collapses exhausted and is easy to kill," Longman said.

"This may sound crazy, but when a hunter is relatively fit the amount of energy they expend is actually tiny compared to the energy benefits of an antelope-sized animal, for example. Before the domestication of dogs, persistence hunting may have been one of the most efficient forms of hunting, and as a consequence may have shaped human evolution."

Distance running may be an evolutionary 'signal' for desirable male genes 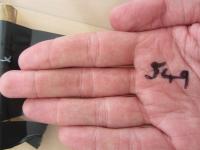