EUGENE, Ore. - Oct. 6, 2020 - Researchers probing peatlands to discover clues about past environments and carbon stocks on land have identified peatland that is twice as old and much deeper than previously thought.

Their findings, detailed in an open-access paper published Sept. 14 in the journal Environmental Research Letters, show that an inland site near Putussibau, not far from the Indonesia-Malaysia border, formed at least 47,800 years old and contains peat 18 meters deep - roughly the height of a six-story building.

The study provides new insights about the climate of equatorial rainforests, especially during the last ice age, said study co-author Dan Gavin, a professor of geography at the University of Oregon.

"This existence of this very deep and old peatland provides some clues on past climate," Gavin said. "It tells us that this area remained sufficiently wet and warm to support peat growth through the last ice age. The climate during that time is still poorly understood as there are few places in the very-wet tropics, where there is no dry season, that have such long sediment archives."

For the study, the research team, led by Monika Ruwaimana, a doctoral student at the UO and lecturer at Indonesia's Universitas Atma Jaya Yogyakarta, collected peat cores from two inland and three coastal sites associated with the Kapuas River in West Kalimantan, a province of Indonesia on Borneo.

The Putussibau site has been not been as disturbed as most other areas of Indonesia by deforestation and land conversion to agriculture.

"We thought the Putussibau site would be thinner because people had already built roads over it," Ruwaimana said. "But surprisingly we found depths of 17 to 18 meters. As comparison, the average peat depth in Indonesia is 5 to 6 meters."

In contrast, the coastal sites, particularly in the Kapuas River delta, contain shallower peatland that didn't begin forming until after the last ice age and after sea level stabilized between 4,000 and 7,000 years ago.

The lower base of the inlet peats that were examined is lower than the current riverbed, noted co-author Gusti Z. Anshari of the Universitas Tanjungpura in Pontianak, Indonesia.

"The inland peat contains an important archive about past hydrology and climates," he said. "The coastal peat bed is higher than the current riverbed, making it prone to dryness. The coastal peat burns every dry season because of water loss through hydrological conductivity."

"The inland peat possibly played an important role in climate and carbon storage before and during the last ice age," Ruwaimana said.

During that glaciation, she noted, atmospheric carbon dioxide was much lower and previous evidence suggested that much of the region's carbon had moved into the oceans. The new findings, however, show inland peatlands persisted.

Across the sites, 37 radiocarbon dates were obtained. During a cool, dry period 20,000-30,000 years ago, Ruwaimana said, the new dating synthesized with previous dating across Indonesia indicated a hiatus of peatland formation.

"The significance is that conditions must have remained sufficiently wet so that the peat in the upper Kapuas was not lost during this period," she said. "The ages provide a clearer picture on its formation history and how it connects to the past climate. As this peat forms layer by layer like a pancake layer cake, each layer tells us the story about fire, plant and climate when that layer was formed."

With the revised depths of inland peatlands at these sites, the researchers suggest that previous estimates of carbon storage - 25.3 gigatons across Indonesia and 9.1 gigatons on Borneo - are too low. However, Ruwaimana said, more data is needed across the region for more accurate calculations.

Depths of the older peats obtained in the study, she noted, varied dramatically, with some peats of less than two meters depth being more than 10,000 years old.

The inland sites, the researchers wrote, may be the oldest tropical peats and contain the largest density of carbon in the world but are increasingly being threatened by changes in land use.

Lucas Silva, a professor of geography and head of the UO's Soil Plant Atmosphere research lab, also was a co-author on the study. 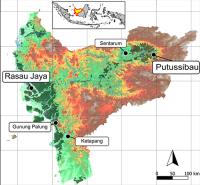