A range of information is collated through a simple framework that will help marine scientists to design more accurate experiments that will better help them understand the projected impact of global warming on marine life.

Understanding the consequences of rising carbon dioxide (CO2) levels and global warming for marine life requires complex experiments that can assess the responses of biota to different environmental scenarios. Experiments need to be able to precisely represent future CO2 levels and temperature if they are to accurately predict the potential impact on different species throughout the world's oceans.

Nathan Geraldi, Carlos Duarte and colleagues at KAUST's Red Sea Research Center recently noted that some published marine research papers did not match up to the CO2 level predictions outlined in the reports from the Intergovernmental Panel on Climate Change (IPCC). This prompted the team to investigate further.

They outline several shortcomings in current scientific knowledge. Although some data exists for the impact of rising CO2 and accompanying warming in the oceans, it is stored in disparate locations and is not accessible through a central database. Further, the IPCC figures for CO2 levels and predicted temperature rises relate predominately to the atmosphere and land surface, rather than to marine environments. Overall, the oceans grow warmer slower than the land, and this should be factored into "future ocean" studies. Also, the IPCC regional projections currently exclude the polar regions, despite the fact that the Arctic is now warming faster than the global average.

"Predicting the responses of marine organisms to future ocean conditions remains challenging, but it is necessary to inform potential risks and impacts," says Duarte. "Experiments mimicking the conditions expected in the future are often used to quantify and assess these responses. However, the Achilles heel of this approach is that the experimental variables are often poorly informed, resulting in misrepresentations."

"There is currently no straightforward way for researchers to select future levels of CO2 and temperature when running experiments on marine life," explains Geraldi. "Current and future conditions in any given region are variable and depend on many factors. Knowing that researchers need to simplify the natural variability, we wanted to provide a framework that would guide them in selecting appropriate CO2 and temperature levels for their studies."

Warming predictions depend on CO2 emissions, and local conditions--for example, geochemistry and vegetation type--can impact CO2 levels for a given area. However, it is very expensive for individual research teams to continuously monitor local and regional CO2 levels.

The KAUST team focused on coral reef regions as a case study for their framework, largely because their responses to global change have been extensively studied in recent years. "Coral reefs are seen as the 'canary in the coal mine' in terms of reflecting impacts of warming and ocean acidification on marine lifeforms," notes Geraldi.

The team assimilated data from the IPCC reports, together with detailed information gathered from studies on coral reefs around the world. The resulting datasets will enable researchers to select more accurate CO2 predictions for their given region at any specific point in the next hundred years. The team also summarized current uncertainties in CO2 emission trajectories and highlighted the challenges of predicting the sensitivity of different ecosystems and organisms to ocean acidification and warming.

If used widely, the team anticipates that their framework will provide a strong base to help improve the robustness and reproducibility of the growing body of research in different marine environments.

"The strength of our framework is its simplicity, but this is also a limitation given that both temperature and CO2 vary across space and time," says Geraldi. "Under optimal conditions, researchers would have the resources to characterize local fluctuations in these variables so that experiments can mimic local conditions. Ultimately, new studies can feed into databases and improve predictions still further."

The team also notes that their framework could feasibly also be applied to terrestrial and freshwater ecosystems. 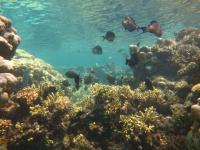