You can teach an old dog new tricks, say UCLA scientists who found that middle-aged and older adults with little Internet experience were able to trigger key centers in the brain that control decision-making and complex reasoning after just one week of surfing the Web.

The findings, presented Oct. 19 at the 2009 meeting of the Society for Neuroscience, suggest that Internet training can stimulate neural activation patterns and could potentially enhance brain function and cognition in older adults.

As the brain ages, a number of structural and functional changes occur, including atrophy, reductions in cell activity and increases in deposits of amyloid plaques and tau tangles, which can impact cognitive function.

Research has shown that mental stimulation similar to that which occurs in individuals who frequently use the Internet may affect the efficiency of cognitive processing and alter the way the brain encodes new information.

"We found that for older people with minimal experience, performing Internet searches for even a relatively short period of time can change brain activity patterns and enhance function," said study author Dr. Gary Small, a professor of psychiatry at the Semel Institute for Neuroscience and Human Behavior at UCLA and the author of "iBrain," a book that describes the impact of new technology on the brain and behavior.

The UCLA team worked with 24 neurologically normal volunteers between the ages of 55 and 78. Prior to the study, half the participants used the Internet daily, while the other half had very little experience. Age, educational level and gender were similar between the two groups.

After the initial brain scan, participants went home and conducted Internet searches for one hour a day for a total of seven days over a two-week period. These practice searches involved using the Internet to answer questions about various topics by exploring different websites and reading information. Participants then received a second brain scan using the same Internet simulation task but with different topics.

The first scan of participants with little Internet experience demonstrated brain activity in regions controlling language, reading, memory and visual abilities, which are located in the frontal, temporal, parietal, visual and posterior cingulate regions, researchers said. The second brain scan of these participants, conducted after the practice Internet searches at home, demonstrated activation of these same regions, as well as triggering of the middle frontal gyrus and inferior frontal gyrus – areas of the brain known to be important in working memory and decision-making.

Thus, after Internet training at home, participants with minimal online experience displayed brain activation patterns very similar to those seen in the group of savvy Internet users – after just a brief period of time.

"The results suggest that searching online may be a simple form of brain exercise that might be employed to enhance cognition in older adults," said Teena D. Moody, the study's first author and a senior research associate at the Semel Institute at UCLA.

When performing an Internet search, the ability to hold important information in working memory and to extract the important points from competing graphics and words is essential, Moody noted.

Previous research by the UCLA team found that searching online resulted in a more than twofold increase in brain activation in older adults with prior experience, compared with those with little Internet experience. According to Small, the new findings suggest that it may take only days for those with minimal experience to match the activity levels of those with years of experience.

Additional studies may address the impact of the Internet on younger individuals and help identify aspects of online searching that generate the greatest levels of brain activation.

The study was funded by the Parvin Foundation.

Susan Y. Bookheimer, professor of psychiatry and biobehavioral sciences at the Semel Institute at UCLA, was also an author of this study. Himaja Gaddipati, a UCLA neuroscience student, and Jennifer Brace, a UCLA doctoral student in neuroscience, contributed to the work. 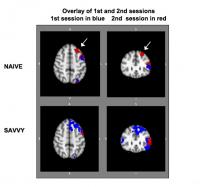