The discovery of a new 125-million-year-old fossil mammal in Spain has pushed back the earliest record of preserved mammalian hair structures and inner organs by more than 60 million years.

The specimen, named Spinolestes xenarthrosus, was fossilized with remarkably intact guard hairs, underfur, tiny hedgehog-like spines and even evidence of a fungal hair infection. The unusually well-preserved fossil also contains an external ear lobe, soft tissues of the liver, lung and diaphragm, and plate-like structures made of keratin known as dermal scutes. The microscopic structures of hair and spines in Spinolestes are the earliest-known examples in mammalian evolutionary history.

"Spinolestes is a spectacular find. It is stunning to see almost perfectly preserved skin and hair structures fossilized in microscopic detail in such an old fossil," said study co-author Zhe-Xi Luo, PhD, professor of organismal biology and anatomy at the University of Chicago. "This Cretaceous furball displays the entire structural diversity of modern mammalian skin and hairs."

The Las Hoyas Quarry in east-central Spain was once a lush wetland with a thriving diversity of life around 125 million years ago during the early Cretaceous period. Spanish paleontologists have studied the site since 1985 and found hundreds of fossils, including important birds and dinosaurs. In 2011, the first mammal fossil at the site was discovered by a team led by Angela D. Buscalioni, PhD, professor of paleontology at the Autonomous University of Madrid, who partnered with collaborators including Luo and Thomas Martin, PhD, professor of paleontology at the University of Bonn, to study the rare specimen.

Spinolestes xenarthrosus lived in the Cretaceous period and belonged to an extinct lineage of early mammals known as triconodonts. The specimen measured roughly 24 cm in length and is estimated to have weighed around 50 to 70 grams, about the size of a modern-day juvenile rat. Its teeth and skeletal features indicate it was a ground-dweller that ate insects. Its soft tissues, with discernable microscopic structures, were preserved through a rare process known as phosphatic fossilization. Individual hair follicles and bulbs, as well as the composition of individual hair shafts, could be identified using an electron scanning microscope.

Spinolestes had remarkably modern mammalian hair and skin structures, such as compound follicles in which multiple hairs emerge from the same pore. It had small spines around a tenth of a millimeter in diameter on its back, similar to modern hedgehogs and African spiny mice, which appeared to be formed by the fusion of filaments at follicles during development. The team even found abnormally truncated hairs that are evidence of a fungal skin infection known as dermatophytosis, which is widely seen among living mammals.

"Hairs and hair-related integumentary structures are fundamental to the livelihood of mammals, and this fossil shows that an ancestral, long-extinct lineage had grown these structures in exactly the same way that modern mammals do," Luo said. "Spinolestes gives us a spectacular revelation about this central aspect of mammalian biology."

Spinolestes is also the first example of a Mesozoic mammal in which soft tissues in the thoracic and abdominal cavities are fossilized. The team noted microscopic bronchiole structures of the lung, as well as iron-rich residues associated with the liver. These areas were separated by a curved boundary that is thought to be a muscular diaphragm for respiration. This represents the earliest-known record of mammalian organ systems.

The fossil of Spinolestes contains a large external ear, the earliest-known example in the mammalian fossil record, as well as dermal scutes--plate-like structures made of skin keratin. A more developed form of scutes can be seen in modern armadillos and pangolins.

Spinolestes had extra articulations between vertebrae, which strengthened its spinal column--modern-day mammals such as armored shrews and armadillos possess similar articulations. The authors speculate that this might provide a clue as to the lifestyle of Spinolestes. Armored shrews, for example, use their exceptional vertebral strength to push apart logs or dead palm leaves to feed on insects within.

"With the complex structural features and variation identified in this fossil, we now have conclusive evidence that many fundamental mammalian characteristics were already well-established some 125 million years, in the age of dinosaurs," Luo said.

The study, "A Cretaceous eutriconodont and integument evolution in early mammals," was supported by Spanish MINECO and Junta de Comunidades de Castilla-La Mancha. Additional authors include Jesus Marugan-Lobon and Hugo Mart?n-Abad of the Autonomous University of Madrid, Romain Vullo of Université de Rennes in France. 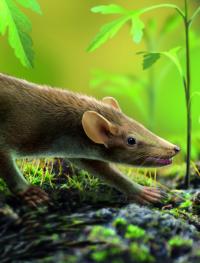