If you are living in the eastern United States, the environment around you is being harmed by air pollution. From Adirondack forests and Shenandoah streams to Appalachian wetlands and the Chesapeake Bay, a new report by the Cary Institute of Ecosystem Studies and The Nature Conservancy has found that air pollution is degrading every major ecosystem type in the northeastern and mid-Atlantic United States.

The report, Threats From Above: Air Pollution Impacts on Ecosystems and Biological Diversity in the Eastern United States, is the first to analyze the large-scale effects that four air pollutants are having across a broad range of habitat types (see inset). The majority of recent studies focus on one individual pollutant. Over 32 experts contributed to the effort; the prognosis is not good.

"Everywhere we looked, we found evidence of air pollution harming natural resources," comments Dr. Gary M. Lovett, an ecologist at the Cary Institute and the lead author of the report. "Decisive action is needed if we plan on preserving functioning ecosystems for future generations."

Pollutants poison areas far from their point of origin

The pollutants assessed – sulfur, nitrogen, mercury, and ground-level ozone – largely originate from smokestacks, tailpipes, and agricultural operations. While initially airborne, these pollutants eventually return to the landscape, where they contaminate the soil and water.

Airborne emissions can travel long distances before making their way back to the ground. Because the eastern United States is downwind from large industrial and urban pollution sources, it receives the highest levels of deposited air pollution in North America. This is bad news for vulnerable wildlife, forest productivity, soil health, water resources, and ultimately, economies.

At the heart of the report is a call to action. Currently, U.S. air quality standards are determined by direct impacts to human health, with regulations targeting emission levels – what leaves tail pipes and smoke stacks. They do not take into account where airborne pollution is actually deposited in the landscape or how this pollution compromises our soil and water resources and resident plants and animals.

"To safeguard ecosystem health, we need a new way of thinking about air pollution – one that moves beyond measuring what is put up in the air, and captures actual impacts to natural areas, wildlife, and the services they provide," Lovett notes.

The authors urge U.S. policymakers to establish air quality standards that are based on critical loads. This is defined as the maximum level of deposited pollution that ecosystems can tolerate before harmful effects occur. By establishing thresholds, pollutants can be regulated in a way that preserves functioning ecosystems. In some areas, such as Rocky Mountain National Park, federal agencies have already adopted this approach to evaluate the threat from air pollution. It is also being used to regulate air pollution throughout Europe.

Monitoring is an essential tool

While there may be initial costs to ramping up monitoring efforts, consider the alternative. The fishless lakes of the Adirondacks are a harsh reminder that air pollution does not recognize property lines. Tear concludes, "In the absence of critical loads, there is a false security in conventional land conservation. We can manage natural areas with the best possible protocols, but we can't really 'protect' the land if it is continually exposed to air pollution."

View the report at www.ecostudies.org/Threats_from_Above.pdf.

View interactive on-line content about the report (including a Q&A): http://www.nature.org/tncscience/misc/art25400.html

The Cary Institute of Ecosystem Studies is a private, not-for-profit environmental research and education organization in Millbrook, NY. For over twenty five years, Cary Institute scientists have been investigating the complex interactions that govern the natural world. Their objective findings lead to more effective policy decisions and increased environmental literacy. Focal areas include air and water pollution, climate change, invasive species, and the ecological dimensions of infectious disease. Learn more at www.ecostudies.org.

The Nature Conservancy is a leading conservation organization working around the world to protect ecologically important lands and waters for nature and people. To date, the Conservancy and its more than one million members have been responsible for the protection of more than 18 million acres in the United States and have helped preserve more than 117 million acres in Latin America, the Caribbean, Asia and the Pacific. Visit The Nature Conservancy on the Web at www.nature.org. 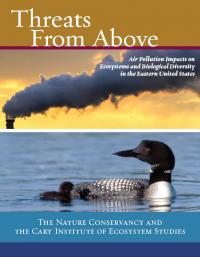 Cover of Threats from Above Report