A graphene water balloon may soon open up new vistas for scientists seeking to understand health and disease at the most fundamental level.

Electron microscopes already provide amazingly clear images of samples just a few nanometers across. But if you want a good look at living tissue, look again.

"You can't put liquid in an electron microscope," says Tolou Shokuhfar, of Michigan Technological University. "So, if you have a hydrated sample—and all living things are hydrated—you have to freeze it, like a blueberry in an ice cube, and cut it into a million thin pieces, so the electrons can pass through. Only then can you image it to see what's going on."

After such treatment, the blueberry isn't what it was, and neither is human tissue. Shokuhfar, an assistant professor of mechanical engineering-engineering mechanics, wondered if there might be a way to make electron microscopes more friendly to biological samples. That way, you might get a much better view of what's really going on at the sub-cellular level.

So she joined colleagues at the University of Illinois-Chicago (UIC), and together they found a way. "You don't need to freeze the blueberry, you don't need to slice it up with a diamond knife," she said. "You just put it in the electron microscope, and you can get down and see the atoms."

The trick was to encapsulate the sample so that all the water stayed put while the electrons passed through freely. To do that, the team, including Robert F. Klie, an associate professor of physics and mechanical and industrial engineering at UIC, and UIC graduate student Canhui Wang, turned to graphene.

"Graphene is just a single layer of carbon atoms, and electrons can go through it easily, but water does not," Klie said. "If you put a drop of water on graphene and top it with graphene, it forms this little balloon of water." The graphene is strong enough to hold the water inside, even within the vacuum of an electron microscope.

The team tried their technique on a biochemical that plays a major role in human health: ferritin. "It's a protein that stores and releases iron, which is critical for many body functions, and if ferritin isn't working right, it may be contributing to lots of diseases, including Alzheimer's and cancer," Shokuhfar said.

The team made a microscopic sandwich, with ferritin immersed in water as the filling and graphene as the bread, and sealed the edges. Then, using a scanning transmission electron microscope, they captured a variety of images showing ferritin's atomic structure. In addition, they used a special type of spectroscopy to identify various atomic and electronic structures within the ferritin. Those images showed that the ferritin was releasing iron and pinpointed its specific form.

If the technique were used to compare ferritin taken from diseased tissue with healthy ferritin, it could provide new insights into illness at the molecular level. Those discoveries could lead to new treatments. "I believe this will allow us to identify disease signatures in ferritin and many other proteins," Shokuhfar said.

An article on their work, "High-Resolution Electron Microscopy and Spectroscopy of Ferritin in Biocompatible Graphene Liquid Cells and Graphene Sandwiches," was published Feb. 4 in Advanced Materials. Qiao Qiao, formerly a graduate student in Klie's UIC lab and now a postdoctoral fellow at Vanderbilt University, is also a coauthor on the study.

The work was funded by Michigan Technological University with additional support from a National Science Foundation grant to UIC, number DMR-0959470. The research was conducted at the University of Illinois-Chicago. 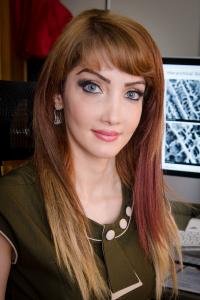 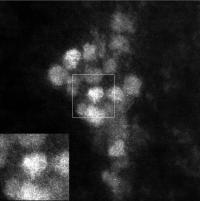