Visual impairment comes in many forms, and it's on the rise in America.

A University of Cincinnati experiment aimed at this diverse and growing population could spark development of advanced tools to help all the aging baby boomers, injured veterans, diabetics and white-cane-wielding pedestrians navigate the blurred edges of everyday life.

These tools could be based on a device called the Enactive Torch, which looks like a combination between a TV remote and Captain Kirk's weapon of choice. But it can do much greater things than change channels or stun aliens.

Luis Favela, a graduate student in philosophy and psychology, has found the torch enables the visually impaired to judge their ability to comfortably pass through narrow passages, like an open door or busy sidewalk, as good as if they were actually seeing such pathways themselves.

The handheld torch uses infra-red sensors to "see" objects in front of it. When the torch detects an object, it emits a vibration -- similar to a cellphone alert – through an attached wristband. The gentle buzz increases in intensity as the torch nears the object, letting the user make judgments about where to move based on a virtual touch.

A GROWING POPULATION IN NEED

Favela studies how people perceive their environment and how those perceptions inform their judgments. For this experiment, he was inspired by what he knew about the surging population of visually impaired Americans.

The Centers for Disease Control and Prevention (CDC) predicts that more than 6 million Americans age 40 and older will be affected by blindness or low vision by 2030 – double the number from 2004 – due to diabetes or other chronic diseases and the rapidly aging population. The CDC also notes that vision loss is among the top 10 causes of disability in the U.S., and vision impairment is one of the most prevalent disabilities in children.

"In my research I've found that there's an emotional stigma that people who are visually impaired experience, particularly children," Favela says. "When you're a kid in elementary school, you want to blend in and be part of the group. It's hard to do that when you're carrying this big, white cane."

In Favela's experiment, 27 undergraduate students with normal or corrected-to-normal vision and no prior experience with mobility assistance devices were asked to make perceptual judgments about their ability to pass through an opening a few feet in front of them without needing to shift their normal posture. Favela tested participants' judgments in three ways: using only their vision, using a cane while blindfolded and using the Enactive Torch while blindfolded. The idea was to compare judgments made with vision against those made by touch.

The results of the experiment were surprising. Favela figured vision-based judgments would be the most accurate because vision tends to be most people's dominant perceptual modality. However, he found the three types of judgments were equally accurate.

"When you compare the participants' judgments with vision, cane and Enactive Torch, there was not a significant difference, meaning that they made the same judgments," Favela says. "The three modalities are functionally equivalent. People can carry out actions just about to the same degree whether they're using their vision or their sense of touch. I was really surprised."

Favela plans additional experiments requiring more complicated judgments, such as the ability to step over an obstacle or to climb stairs. With further study and improvements to the Enactive Torch, Favela says similar tools that augment touch-based perception could have a significant impact on the lives of the visually impaired.

"If the future version of the Enactive Torch is smaller and more compact, kids who use it wouldn't stand out from the crowd, they might feel like they blend in more," he says, noting people can quickly adapt to using the torch. "That bodes well, say, for someone in the Marines who was injured by a roadside bomb. They could be devastated. But hope's not lost. They will learn how to navigate the world pretty quickly."

'Seeing' through virtual touch is believing 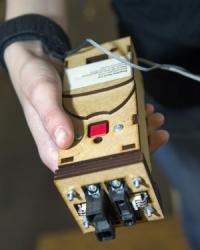