A team led by scientists from Scripps Institution of Oceanography at the University of California San Diego and the J. Craig Venter Institute (JCVI) has demonstrated that the excess carbon dioxide added to the atmosphere through the combustion of fossil fuels interferes with the health of phytoplankton which form the base of marine food webs.

As reported in the March 14 edition of Nature, the team shows that a mechanism widely used by phytoplankton to acquire iron has a requirement for carbonate ions. Rising concentrations of atmospheric CO2 are acidifying the ocean and decreasing carbonate, and the team shows how this loss of carbonate affects the ability of phytoplankton to obtain enough of the nutrient iron for growth. Ocean acidification is poised to decrease the concentration of sea surface carbonate ions 50 percent by the end of this century.

The study, "Carbonate-sensitive phytotransferrin controls high-affinity iron uptake in diatoms," was funded by the National Science Foundation, the Gordon and Betty Moore Foundation, and the U.S. Department of Energy. It reveals an unexpected twist to the theory of how iron controls the growth of phytoplankton. By showing how the loss of seawater carbonate hampers the ability of phytoplankton to grab onto iron, the authors show a direct connection between the effects of ocean acidification and the health of phytoplankton at the base of the marine food chain.

"Ultimately our study reveals the possibility of a 'feedback mechanism' operating in parts of the ocean where iron already constrains the growth of phytoplankton," said Jeff McQuaid, lead author of the study who made the discoveries as a PhD student at Scripps Oceanography. "In these regions, high concentrations of atmospheric CO2 could decrease phytoplankton growth, restricting the ability of the ocean to absorb CO2 and thus leading to ever higher concentrations of CO2 accumulating in the atmosphere."

"Studies investigating the effects of high CO2 on phytoplankton growth have shown mixed results to date. In some cases, certain phytoplankton seem to benefit from high CO2," added Andrew E. Allen, a biologist with a joint appointment at Scripps and JCVI who is senior author and initiator of the study. "Most of these studies, however, have been conducted under high-iron conditions. Our study uncovers a widespread cellular mechanism that suggests high CO2 might be particularly problematic for phytoplankton growth in low-iron regions of the ocean."

One consequence of acidification is a nearly one-for-one reduction in the concentration of carbonate ions for every molecule of CO2 that dissolves in the ocean. The concentration of atmospheric CO2 is predicted to double by the end of this century; thus, the concentration of carbonate ions at the surface of the ocean will nearly halve by the year 2100. While the negative influence of acidification on corals and shellfish is known, this is the first study to reveal a mechanism that affects life which forms the base of most marine food webs.

This study revises a key concept in oceanography that the growth of phytoplankton in vast areas of the ocean is regulated by the concentration of iron. In ocean regions that are high in dissolved nutrients like nitrogen and phosphorous, iron limitation results in low numbers of phytoplankton relative to amounts of available nutrients. Addition of iron to these areas causes phytoplankton, particularly diatoms, to grow. In the largest of these regions, the Southern Ocean, concentrations of available iron are below one trillionth of a gram per liter, approaching the limit supporting life.

Marine scientists have spent decades investigating how phytoplankton are able to grab such low concentrations of iron from seawater and internalize it.

"Understanding the mechanism of iron uptake is critical to develop meaningful predictions on how phytoplankton may respond to future ocean conditions, but this understanding has been elusive," said Adam Kustka, a trace metal physiologist and project collaborator from Rutgers University.

Clues began to emerge in 2008, when Allen discovered several iron-responsive genes in diatoms that had no known function. That same year, McQuaid was traveling around East Antarctica assisting in a survey of plankton in the Southern Ocean. DNA analysis of those samples revealed that one of Allen's iron genes was not only present in every sample of seawater, but every major phytoplankton group in the Southern Ocean seemed to have a copy.

"This gene, called ISIP2A, was one of the most abundantly transcribed genes in low-iron Southern Ocean, suggesting it had a really important role in the environment," said Allen.

Earlier studies suggested a transferrin-like protein, called phytotransferrin, was at work in the marine environment, but ISIP2A looked nothing like transferrin. It took the development of an entirely new discipline, synthetic biology, to help prove the team's hypothesis that ISIP2A was a type of transferrin. Synthetic biology is the fusion of biology and engineering, and in collaboration with scientists with the Venter Institute, the team developed methods to insert synthetic DNA into a marine diatom. The scientists deleted ISIP2A and replaced it with a synthetic gene for human transferrin, demonstrating that ISIP2A was a type of transferrin.

The team then initiated a study to investigate the evolutionary relationships of transferrin and phytotransferrin. To their surprise, the proteins were functional analogs whose ancient origins extend to the pre-Cambrian period of Earth history, predating the appearance of modern plants and animals.

"The appearance of phytotransferrin some 700 million years ago is consistent with a time in Earth's history marked by massive changes in ocean chemistry, and this ancient evolutionary history helps explain why no one has connected ISIP2A and transferrin," said Miroslav Oborník, a molecular evolutionary biologist from the University of South Bohemia and co-author on the paper.

In transferrin, iron and carbonate bind simultaneously, and neither can bind in the absence of the other. Such synergistic binding is unique among biological interactions. The research team hypothesized that diatom phytotransferrin uses a similar mechanism and that, as a result, reductions in carbonate ion could lead to reduced phytoplankton growth rates.

"Since carbonate and iron have to bind simultaneously, as carbonate concentrations drop, phytotransferrin is able to 'see' less iron," said McQuaid. "The total amount of iron isn't changing - rather the ability to grab onto it changes, and this ultimately influences the growth rate." 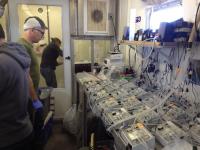