Drawing on advances in robotics and computer technology, Johns Hopkins University researchers are designing new high-tech medical tools to equip the operating room of the future. These systems and instruments could someday help doctors treat patients more safely and effectively and allow them to perform surgical tasks that are nearly impossible today.

The tools include a snakelike robot that could enable surgeons, operating in the narrow throat region, to make incisions and tie sutures with greater dexterity and precision. Another robot, the steady-hand, may curb a surgeon's natural tremor and allow the doctor to inject drugs into tiny blood vessels in the eye, dissolving clots that can damage vision.

These and other projects are being built by teams in the National Science Foundation Engineering Research Center for Computer-Integrated Surgical Systems and Technology, based at Johns Hopkins. Launched in 1998 with funding from the NSF, the center aims to transform and improve the way many medical procedures are performed.

Working closely with physicians from the Johns Hopkins School of Medicine, the center's engineers and computer scientists are building robotic assistants intended to enhance a surgeon's skills. They are devising detailed visual displays to guide a doctor before and during a difficult medical procedure and planning digital workstations that would give the physician instant access to an enormous amount of medical information about the patient.

Because most of the new medical tools are linked to computers, their work can easily be recorded. Later, these records would be checked against data describing how well a patient responded to the treatment. From this review, doctors could learn which techniques and procedures were most effective. "We could produce the equivalent of a flight-data recorder for the operating room," said Russell H. Taylor, a professor of computer science and director of the center.

The emphasis is on futuristic technology, but "we're not trying to replace or automate surgeons," Taylor insists. "We want to work in partnership with surgeons to help them do their work more effectively. Human hands are remarkable, but they have limitations. There are times when it would be useful to have a 'third hand,' and we can provide that. Sometimes a surgeon's fingers are too large to work in a small confined space within the body. We can help by building tools that act like unhumanly small and highly dexterous hands."

One promising example is the team's snakelike robot. Currently, a doctor performing throat surgery must insert and manually manipulate long inflexible tools and a camera into this narrow passageway. The snakelike robot would provide an alternative. It could enter the throat with two thin rods tipped with tentaclelike tools capable of moving with six degrees of freedom. If directed, the tools can bend easily into an S-curve.

During surgery, a doctor would sit at a robotic workstation and peer into eyepieces that display a three-dimensional view of the operating site. The doctor would then maneuver the controls to guide the movement of the robot. The prototype is made of nonmagnetic metals so that it can be used safely near magnetic imaging equipment. The tools' movements are nimble because sophisticated software can make up to 100 adjustments per second.

The steady-hand system, also devised by a Johns Hopkins team, was built to help with another challenging task: microsurgery. At this scale, even the best surgeons display some tremor in their hands. Yet the slightest uncontrolled movements can be troublesome during surgery on microscopic structures, such as tiny blood vessels in the eye. To address this problem, the steady-hand robot can grasp a needle and move it carefully in tandem with the surgeon in a technique called cooperative manipulation.

In tests of the device, the researchers have successfully injected a liquid into a chicken embryo's blood vessels, resembling structures in the human eye. "The steady-hand could allow a surgeon to make very precise and accurate micro-movements without tremor," Taylor said.

Before they are used on human patients, both the snakelike robot and the steady-hand system will require perhaps five more years of lab testing and prototype advancement. Still, Taylor believes both have a good chance of eventually joining more traditional tools in hospital operating rooms. "What makes this work particularly rewarding," he said, "is that we have the opportunity to do cutting-edge engineering that can help people in a very direct way."

A video showing some of this research is online at: http://www.jhu.edu/news/audio-video/medical_robotics.html 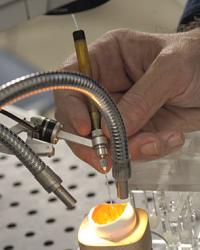