NASA has estimated rainfall from the Pineapple Express over the coastal regions southwestern Oregon and northern California from the series of storms in February, 2017.

The West Coast is once again feeling the effects of the "Pineapple Express." Back in early January one of these "atmospheric river" events, which taps into tropical moisture from as far away as the Hawaiian Islands, brought heavy rains from Washington state and Oregon all the way down to southern California. This second time around, many of those same areas were hit again. The current rains are a result of three separate surges of moisture impacting the West Coast. The first such surge in this current event began impacting the Pacific coastal regions of Washington, Oregon, and northern California on February 15.

The Integrated Multi-satellitE Retrievals for GPM (the Global Precipitation Measurement mission) or IMERG is used to estimate precipitation from a combination of passive microwave sensors, including GPM's microwave imager (GMI) and geostationary satellite infrared data. GPM is a joint mission between NASA and the Japanese space agency JAXA.

At NASA's Goddard Space Flight Center in Greenbelt, Maryland data from IMERG was used to create images and animations showing the rainfall. One image showed accumulated IMERG rainfall estimates for the period from Feb. 15 at 00:30 UTC (Feb. 14 at 7:30 p.m. EST) to Feb. 23 at 23:00 UTC (6 p.m. EST). The initial surge was responsible for bringing part of the rainfall (up to about 2 to 3 inches) was seen over the coastal regions southwestern Oregon and northern California.

The next surge of moisture began to arrive on Feb. 17 and brought moderate to somewhat heavy rain initially to parts of the northern Sacramento Valley and along and inward from the coast from about Big Sur southward to Los Angeles. It delivered even heavier rainfall farther southward along the coast into Baja California where up to 7 to 10 inches is estimated to have fallen (shown in purple and pink). This surge was also responsible for bringing moderate to heavy rains (about 2 to 4 inches, shown in yellow and red) to parts of Arizona.

The analysis showed rain rates derived from both the GMI microwave imager and dual-frequency precipitation radar or DPR, that were overlaid on enhanced visible and infrared data from NOAA's GOES-West satellite to create a full picture. The image was taken on Feb. 17 at 21:03 UTC (4:03 p.m. EST) and showed a long plume of mostly moderate rain (green areas) streaming northward into the coast around Los Angeles in association with this second surge. GPM's DPR can also provide details on storm structure. This third image shows precipitation top heights corresponding to the previous image. The storms tops are all relatively shallow (generally below 7 km, shown in blue) with the highest only reaching just over 8 km (shown in lighter blue). The bulk of the rain accumulation is due to the steady, non-stop nature of this relatively shallow, moderate rain and the effects of orographic enhancement and not to intense thunderstorm activity.

The final and most recent surge of moisture began making its way ashore in and around central California closer to the San Francisco Bay area on Feb. 20, bringing rain to the Bay Area as well as farther north along the coast and enhancing the rainfall totals over the Sacramento Valley and coastal northern California and southwest Oregon.

Another storm system is forecast to impact the San Francisco region over the weekend. To get updated forecasts from the National Weather Service, visit: http://www.weather.gov.

For a global animated view of the IMERG precipitation and GEOS water vapor during the first three weeks of February 2017, visit: https://svs.gsfc.nasa.gov/4555 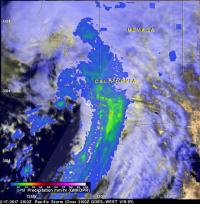