Osaka, Japan - Researchers at The Institute of Scientific and Industrial Research at Osaka University introduced a new liquid-phase fabrication method for producing nanocellulose films with multiple axes of alignment. Using 3D-printing methods for increased control, this work may lead to cheaper and more environmentally friendly optical and thermal devices.

Ever since appearing on the original Star Trek TV show in the 1960s, the game of "three-dimensional chess" has been used as a metaphor for sophisticated thinking. Now, researchers at Osaka University can say that they have added their own version, with potential applications in advanced optics and inexpensive smartphone displays.

Many existing optical devices, including liquid-crystal displays (LCDs) found in older flat-screen televisions, rely on long needle-shaped molecules aligned in the same direction. However, getting fibers to line up in multiple directions on the same device is much more difficult. Having a method that can reliably and cheaply produce optical fibers would accelerate the manufacture of low-cost displays or even "paper electronics"—computers that could be printed from biodegradable materials on demand.

Cellulose, the primary component of cotton and wood, is an abundant renewable resource made of long molecules. Nanocelluloses are nanofibers made of uniaxially aligned cellulose molecular chains that have different optical and heat conduction properties along one direction compared to the another.

In newly published research from the Institute of Scientific and Industrial Research at Osaka University, nanocellulose was harvested from sea pineapples, a kind of sea squirt. They then used liquid-phase 3D-pattering, which combined the wet spinning of nanofibers with the precision of 3D-printing. A custom-made triaxial robot dispensed a nanocellulose aqueous suspension into an acetone coagulation bath.

"We developed this liquid-phase three-dimensional patterning technique to allow for nanocellulose alignment along any preferred axis," says first author Kojiro Uetani. The direction of the patterns could be programmed so that it formed an alternating checkerboard pattern of vertically- and horizontally-aligned fibers.

To demonstrate the method, a film was sandwiched between two orthogonal polarizing films. Under the proper viewing conditions, a birefringent checkerboard pattern appeared. They also measured the thermal transfer and optical retardation properties.

"Our findings could aid in the development of next-generation optical materials and paper electronics," says senior author Masaya Nogi. "This could be the start of bottom-up techniques for building sophisticated and energy-efficient optical and thermal materials."

The article, "Checkered films of multiaxis oriented nanocelluloses by liquid-phase three-dimensional patterning," was published in Nanomaterials at DOI: https://doi.org/10.3390/nano10050958. 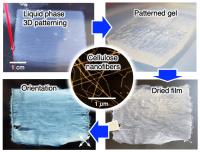