UPDATE: After publication, data input errors were discovered in the 2016 Cost of Voting Index (COVI), affecting the state rankings. The corrected COVI values (and rankings) for each presidential election year dating back to 1996 can be found here – scroll down to download the file titled, “COVI Values 1996-2020old and new (xlsx).”

DeKalb, Ill. — Wide variations among the 50 states when it comes to the ease of casting a ballot are impacting the quality of democracy in the United States, a new study shows.

Forget voter fraud. States are influencing who votes by making it easier or harder to cast a ballot, and that’s likely shaping election results, said study lead author Scot Schraufnagel, chair of the Department of Political Science at Northern Illinois University. He worked on the study with co-authors Michael J. Pomante II and Quan Li. Pomante II earned his doctorate from NIU in 2016 and works as a professor at Jacksonville University in Florida, while Li is a professor at Wuhan University in China.

They created a “Cost of Voting Index”—using what is described in the study as “the largest assemblage of state election laws”—to rank each state according to the time and effort it took to vote in each presidential election year from 1996 through 2016.

They analyzed the impact of 33 different variables dealing with registration and voting laws, with differences in registration deadlines carrying the most weight.

Oregon took top honors for making it easy on voters in 2016—followed by Colorado, California, North Dakota and Iowa. Illinois was tied for 12th overall with Minnesota. Voters in 2016 faced the most inconveniences on the way to the ballot box in Mississippi—followed by Virginia, Tennessee, Indiana and Texas.

While the rankings themselves—as well as several significant changes in ranks through the years—are telling, there’s an underlying message in the study, published online ahead of print in Election Law Journal: Rules, Politics, and Policy. As an open access research study, it is available for free to the public.

“The ballot box is the central democratic institution,” Schraufnagel said. “Voting and elections are key to democracy. One of the things that define the competency of an electoral system and the legitimacy of governing institutions is the ease in which you can vote.

“The study does give us some very substantive findings that we can report about the effect on voter turnout. But we created this index with the idea in mind that it’s going to have a lot of interest for reasons beyond voter turnout because it helps to define an electoral climate, which might influence whether people are willing to run for public office or who is willing to run for office. There also are implications for civil rights. We know, anecdotally, states with larger African-American populations have higher ‘cost of voting’ values.”

Improving the ease to vote nationwide potentially could bump presidential election turnout from an average of about 55 percent to more than 65 percent, Schraufnagel said.

What seems to have generally evolved is a push by some liberal states to make it easier to vote, he said, while some conservative states have made it harder.

“The ballot box is the central democratic institution. Voting and elections are key to democracy. One of the things that define the competency of an electoral system and the legitimacy of governing institutions is the ease in which you can vote,” says Scot Schraufnagel, study lead author and chair of the Department of Political Science at Northern Illinois University. Source: Northern Illinois University

Washington jumped from a rank as the 46th most difficult state to vote in during the 1996 presidential election to a rank of 11th in 2016. Among those states changing in rank the most during that timeframe, West Virginia, California, Louisiana and Connecticut also moved up in rank when it came to the ease of casting a ballot.

On the flip side, Tennessee had the largest drop—ranking 10th during the 1996 election and dipping to 48th in 2016. Other states dropping in rank  in that timeframe included New Hampshire, Texas, Wyoming and Kansas.

Illinois moved 21 places from 1996 to 2016—from a rank of 33rd to 12th, mainly because of its same-day and online registration options, absentee and early voting offerings, as well as its voter identification law, which does not require voters to present a form of photo ID at the polls unless they did not provide proof of identity at registration.

With registration deadlines as a main factor, the index also looked at voter-registration restrictions, voter ID laws, early and mail-in voting and automatic voter registration, among other characteristics largely shaped by states and lower courts.

“Particularly, since 2008, there has been a flurry of new laws which change the relative cost of voting in each state,” the study states. “Some changes, such as mail-in voting, have reduced costs while others, like registration drive restrictions and more stringent voter identification laws, have increased the ‘cost’ of voting.”

Automatic voter registration is the norm in much of Europe and Latin America. In South Korea, Election Day is a national holiday—a suggestion in a 2001 National Commission on Federal Election Reform study by former Presidents Jimmy Carter and Gerald Ford on how to increase voter turnout in the U.S.

“For now, we can safely argue that if states desire higher citizen participation rates in elections, a reasonable place to start would be a same-day voter registration policy,” the new study states. “Beyond voter registration considerations, early voting polling stations and mail-in voting will, on average, increase citizen participation in elections.”

The benefits of making it easier to vote outweigh any potential risk of voter fraud, Schraufnagel said.

“Studies show voter fraud has never been widespread and is largely a figment of people’s imaginations,” he said. “There have been people who voted fraudulently, but the volume is so minimal that, if it has made a difference, it’s in some obscure relatively inconsequential election. Voter fraud is just not an important issue. The big picture is about the quality of our democracy moving forward.” 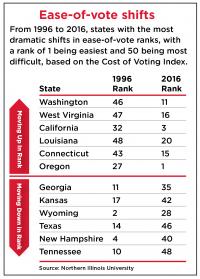 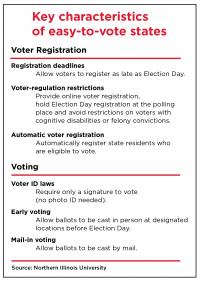