The compulsive hoarding of animals is a poorly understood psychiatric disorder in people. Characterised by failure to provide minimum standards of care, it can result in malnourishment, uncontrolled breeding, overcrowding and neglect. Typically there is denial of this failure and its impact on the animals and people involved. Even less well understood is the growing trend of 'institutional hoarding' by organisations masquerading to the public as legitimate shelters or rescue centres. A new epidemiological study by Dr Linda Jacobson, of the Toronto Humane Society (THS), and shelter medicine colleagues at Ontario Veterinary College and JVR Shelter Strategies, California, shows that there are significant welfare concerns for hoarded cats not just from the home environment but from institutional settings also.1

While animal hoarding is recognised to encompass a continuum of harm and severity, attention from the scientific community has mostly focused on large-scale cases and/or those involving legal seizure of animals and prosecutions. Comparatively little attention has been directed at smaller-scale cases, particularly those associated with a collaborative approach and voluntary relinquishment of animals.

Published this month in the Journal of Feline Medicine and Surgery, Dr Jacobson's study looked at 371 hoarded cats relinquished over a three-year period to the THS, an adoption guaranteed ('no-kill') shelter with a full-service veterinary hospital. Groups of cats ranged from 10 to 77 in number, with nine groups originating from home environments (designated non-institutional hoarding) and three from rescues (designated institutional hoarding). The majority of cats (95%) were surrendered voluntarily, many with the assistance of a community intermediary who was able to provide a navigable pathway between the animal hoarders and the THS.

The authors documented a range of conditions typical for hoarded cats. Almost 90% of cats were unneutered and 18% of females of breeding age were pregnant. Upper respiratory infection (URI), skin disease, ear mites and oral disease (gingivitis) were found in the largest number of groups. URI, which is associated with stress and overcrowding in cats, was the most common medical condition (38%) overall, followed by skin disease (30%). Notably, the risk of URI, and particularly chronic URI, was significantly greater for institutional hoarding compared with non-institutional hoarding settings.

The study concludes that there is a need for a greater focus on institutional hoarding, and also points to the role that can be played by colony cat caregivers and other community intermediaries as an alternative to the legal seizure of animals in hoarding cases. Commenting, Dr Jacobson says: 'The "seize and euthanize" model is outdated and can often be successfully replaced by a least harms model.' This might help to reduce some of the unintended negative consequences associated with the traditional approach, such as delayed response times, stress for the animals and owners and overwhelming costs.

Journal of Feline Medicine and Surgery 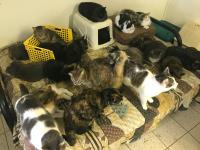