Six black-naped terns -- a coastal seabird found in the Pacific and Indian Oceans -- have given researchers a glimpse into how they navigate tropical typhoons.

The research team based in Japan published their analysis on May 30 in Marine Biology, a Springer journal.

"Our goal was to examine the migration characteristics of the black-naped terns from the Okinawa Islands," said paper author Jean-Baptiste Thiebot, project researcher at the National Institute of Polar Research (NIPR) in Japan. "The bird is listed as vulnerable by Japan's Ministry of Environment."

Thiebot and the team were specifically interested in finding where the birds spend their winters and how they manage to cross the Philippine Sea. The body of water lays just south of Japan, covering an area of two million square miles that suffers from frequent and strong typhoons.

"The birds have to cross the Philippine Sea during the peak of typhoon season," Thiebot said.

The birds nest near Okinawa in mid-May, lay their eggs in June, and the hatchlings are ready to leave the nest near the end of August. The adults then spend September traveling to their wintering sites south of the Philippine Sea -- but, it appears the time and path of travel depends on typhoon season.

"The two birds tracked in years of medium-high typhoon activity from 2012 to 2014 seemed to target a stopover area in the northern Philippines several days after a typhoon hit," Thiebot said. "By contrast, in 2017, no strong typhoon hit in August, and the four study birds departed 23.8 days later, but moved significantly quicker with little or no stopover."

Despite when they left the breeding grounds, the birds always arrived in the Indonesian islands south of the Philippine Sea within four days of October 1.

"The terns seemed to adjust the timing and path of their migration according to the level of typhoon activity," Thiebot said. "It is likely that terns respond to the typhoon activity because the storms modify the birds' feeding conditions at the water surface."

The terns may use environmental cues, such as the low infrasound storms emit, to time their migration, according to Thiebot. The researchers plan to record the infrasound levels at the breeding area to test this hypothesis, and they hope to further study the terns' migration across years of typhoon activity to refine their understanding.

This work was supported by the 'Monitoring Sites 1000 Project' of the Ministry of the Environment, and it was funded by the Suntory Fund for Bird Conservation (2017-19) and Bird Migration Research Center, Yamashina Institute for Ornithology in 2012.

Other contributors include Noboru Nakamura, Naoki Tomita and project leader Kiyoaki Ozaki, all of whom are affiliated with the Yamashina Institute for Ornithology; and Yutaka Toguchi of Koboh Ryukyurobin.

Birds of a feather flock together, but timing depends on typhoons 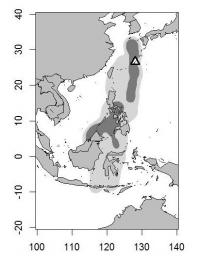 The Main Route in September

Typhoon Path Between Okinawa and the Philippines