It is about fundamental questions of modern fundamental physics: Is our description of nature complete? What is dark matter? Do natural constants change with time or place? Theoretical predictions attest optical clocks based on highly charged ions a 20-fold sensitivity to these effects compared to previous clocks. With a concept for the first-time realization of such special clocks, in which the highly charged ions are controlled by quantum techniques and measured by laser spectroscopy, Prof. Dr. Piet O. Schmidt (Physikalisch-Technische Bundesanstalt and Leibniz Universität Hannover) has now obtained one of the most prestigious research grants: an ERC Advanced Grant. With this, the European Research Council (ERC) is providing almost 2.5 million euros for a five-year project. Schmidt's goal: to achieve at least a 10-fold improvement in the limits for new forces and changes in natural constants and also to address important questions in astronomy and plasma physics with his novel measurement methods.

Schmidt has given the planned project the name FunClocks, where "Fun" stands for "Fundamental Physics." The fact that the name also reminds him of "fun" is not unpleasant to Schmidt: "It's already a great satisfaction to do research at this level," he says. Schmidt is one of the world's leading scientists in the field of quantum logic spectroscopy. This involves combining optical spectroscopy with quantum technology methods: Researchers take advantage of the fact that two different particles can be quantum mechanically coupled. They use a so-called logic ion for manipulations and control, such as extreme cooling and subsequent spectroscopic measurement, to ultimately find out about another ion. Exactly the same methods are being used in "Quantum Valley Lower Saxony" (QVLS) to build a 50-qubit quantum computer. "In our experiments, we benefit from the unique environment with PTB as a national metrology institute, the Leibniz University, the technology development within QVLS, and the basic research on "new physics" within the Cluster of Excellence QuantumFrontiers," Schmidt points out, who is also speaker of "QuantumValley Lower Saxony".

In their latest experiment, Schmidt's team used the combination of beryllium (as a logic ion) and highly charged argon (as a spectroscopy ion, i.e., the actual object of their interest). In doing so, the researchers, who worked closely with colleagues at the Max Planck Institute for Nuclear Physics in Heidelberg, achieved an improvement of nine orders of magnitude over previous setups in which highly charged ions were created and studied in electron beam ion traps. With this huge increase in accuracy, they achieved a breakthrough for the use of highly charged ions in high-precision spectroscopy, as used in optical atomic clocks.

A highly charged ion is an atom that has lost many electrons and therefore has a high positive charge. The more highly charged an ion, the closer the remaining electrons are to the nucleus of the atom and the faster they move as well. This leads to the high sensitivity of these ions to effects postulated by the "new physics", while at the same time being insensitive to external perturbation effects. "This makes highly charged ions particularly attractive for optical clocks," says Schmidt. "Our new method allows us to study highly charged ions in a wide variety of charge states. This gives the periodic table a third dimension, namely the charge state," Schmidt explains. With this, his team plans to build optical atomic clocks with different species that can be selected according to their properties, for example, in terms of their suitability for detecting dark matter and possible changes in the fine structure constant, or in terms of being helpful in the search for previously undiscovered so-called "fifth forces." These forces are predicted in New Physics theories such as string theory, but so far have not been detected beyond doubt even with the best available measurements.

While this is a field exclusively for measurements of the highest accuracy, the team in the project also aims to develop other, somewhat simpler methods of precision spectroscopy on highly charged ions, which could then find a variety of applications in astronomy or plasma physics, for example.

The ERC Advanced Grant is one of the most highly endowed research funding awards of all. With it, the European Research Council supports international top-level researchers to pursue ground-breaking projects of special, internationally significant scope and future viability. (es/ptb)

The European Research Council, set up by the European Union in 2007, is the premier European funding organisation for excellent frontier research. Every year, it selects and funds the very best, creative researchers of any nationality and age, to run projects based in Europe. The ERC offers four core grant schemes: Starting, Consolidator, Advanced and Synergy Grants. With its additional Proof of Concept grant scheme, the ERC helps grantees to bridge the gap between their pioneering research and early phases of its commercialisation. To date, the ERC has funded nearly 10,000 researchers at various stages of their careers, and over 70,000 postdoctoral fellows, PhD students and other staff working in their research teams. The ERC is led by an independent governing body, the Scientific Council. The ERC President is Professor Jean-Pierre Bourguignon. The overall ERC budget from 2021 to 2027 is more than €16 billion, as part of the Horizon Europe programme, under the responsibility of the European Commissioner for Innovation, Research, Culture, Education and Youth, Mariya Gabriel.

Multimillion euro funding for the search for 'new physics' 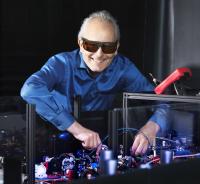 Prof. Dr. Piet Schmidt at work on the laser table.