Tropical Storm Beryl formed off the Carolina coast on Friday, May 25 as "System 94L" and later that day became the second tropical storm of the Atlantic Hurricane Season, before the season even started. Over the Memorial Day holiday weekend in the U.S. NASA and NOAA satellites kept track of Beryl, feeding forecasters with valuable data.

NASA's Aqua and Terra satellites and NOAA's GOES-13 satellite have been monitoring the progression of Beryl and continue to provide visible, infrared, rainfall, temperature, and other data to forecasters at the National Hurricane Center, in Miami, Fla.

An animation of satellite imagery from NOAA's GOES-13 satellite was created at NASA's GOES Project at the NASA Goddard Space Flight Center in Greenbelt, Md. that shows the birth, landfall and progression of Beryl from May 26 through May 28, 2012.

On May 26 at 1615 UTC (12:15 p.m. EDT), NASA's Terra satellite passed over Tropical Storm Beryl when it was still off the U.S. East coast. The Moderate Resolution Imaging Spectroradiometer (MODIS) instrument that flies onboard Terra captured a visible image of the storm that showed its circulation center. To see the image, visit: http://lance-modis.eosdis.nasa.gov/cgi-bin/imagery/single.cgi?image=Beryl.A2012147.1615.1km.jpg.

Later on May 27 at 1835 UTC (2:35 p.m. EDT), NASA's Aqua satellite passed over Beryl and the MODIS instrument on that satellite, like the one on NASA's Terra satellite, captured an image of Beryl over northern Florida. To see that image, visit: http://lance-modis.eosdis.nasa.gov/cgi-bin/imagery/single.cgi?image=Beryl.A2012148.1835.2km.jpg. NASA's Tropical Rainfall Measuring Mission (TRMM) satellite was capturing rainfall data on Beryl over the holiday weekend, and on May 27 saw light to moderate rainfall throughout the system with some areas west of the center dropping heavy rain. To see the TRMM image, visit: http://trmm.gsfc.nasa.gov/images_dir/beryl_27may2012_2130_utc_vis-rain_blend.mpg

On Tuesday, May 29 at 5 a.m. EDT (0900 UTC), Beryl was a tropical depression with maximum sustained winds near 30 mph (45 kph). Beryl's center was located just 10 miles from Valdosta, Georgia, near 30.9 North and 83.4 West. Valdosta is famous for being the boyhood home of Dr. John Holliday, the dentist that fought alongside Wyatt Earp in the shootout near the O.K. Corral in Oct. 1881 in Tombstone, Ariz.

Beryl is crawling to the north at 2 mph (4 kph) and is expected to turn to the northeast and speed up as it heads toward the Atlantic coast.

As Beryl continues its slow trek back to its Atlantic Ocean birthplace, it continues to generate dangerous surf conditions from South Carolina to northern Florida, with rip currents and heavy surf.

Forecasters at the National Hurricane Center expect Beryl to be close to the coast of South Carolina by early Wednesday morning, May 30, and back into the Atlantic Ocean later on that day. Once Beryl moves closer to the warm waters of the Gulf Stream in the Atlantic, it is expected to strengthen and may once again become a tropical storm. 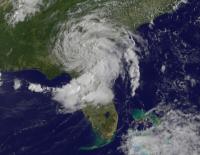