ITHACA, N.Y. - The researchers behind a new online game are inviting members of the public to look under a virtual microscope and contribute directly to Alzheimer's disease research at Cornell University.

Stall Catchers, a game launched this week by the Human Computation Institute (HCI), challenges users to scroll through short, black-and-white videos and search for clogged blood vessels within a highlighted area. Points are earned as more vessels are identified. "It's open to people of all ages. We have even seen some 8-year-olds beat their parents at this game," said Pietro Michelucci, director of HCI.

The game's videos come from the lab of Chris Schaffer and Nozomi Nishimura in Cornell's Meinig School of Biomedical Engineering, where the two researchers have been making important new discoveries about how reduced blood flow in the brain contributes to Alzheimer's through studies in mice that get the disease.

"For the first time, we were able to identify the mechanism that is responsible for the significant blood flow reduction in Alzheimer's, and were even able to reverse some of the cognitive symptoms typical to the disease when we gave a drug that improved blood flow," said Schaffer, associate professor. "But right now, the bottleneck in our research is the finding of stalled blood vessels, a process we have not been able to automate and which is done through manual image inspection."

Schaffer added that in two hours a researcher in the lab can acquire image data that requires about one week of manual image analysis. And because all computer algorithms that have been attempted so far cannot find stalled blood vessels accurately, the task is better suited for a keen human eye.

"While we can acquire enough data to test a new idea about this process or test a potential therapeutic to treat the blood flow reduction in about a week, it takes us a full year to analyze that data," said Nishimura, assistant professor. "My hope is that with help from the public, we can dramatically accelerate the pace of our research."

Stall Catchers is one of two games being developed as part of EyesOnALZ, a citizen science project created so that people with little to no scientific knowledge can help researchers analyze data. The platform for Stall Catchers is based on the highly successful citizen science project Stardust@home run by Professor Andrew Westfall at the University of California, Berkeley, which identified particles of interstellar dust imbedded in a glass gel that was flown in space. Also participating in the project are Princeton University, SciStarter.com and WiredDifferently.org.

"Today, we have a handful of lab experts putting their eyes on the research data," said Michelucci. "If we can enlist thousands of people to do that same analysis by playing an online game, then we have created a huge force multiplier in our fight against this dreadful disease."

In the fight against Alzheimer's, online gamers can now get in on the action 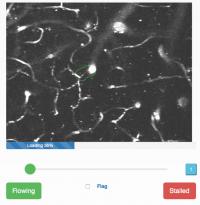