(Santa Barbara, Calif.) –– Bold and outgoing or shy and retiring –– while many people can shift from one to the other as circumstances warrant, in general they lean toward one disposition or the other. And that inclination changes little over the course of their lives.

Why this is the case and why it matters in a more traditional context are questions being addressed by anthropologists at UC Santa Barbara. Using fertility and child survivorship as their main measures of reproductive fitness, the researchers studied over 600 adult members of the Tsimane, an isolated indigenous population in central Bolivia, and discovered that more open, outgoing –– and less anxious –– personalities were associated with having more children –– but only among men.

Their findings appear online in the journal Evolution and Human Behavior.

"The idea that we're funneled into a relatively fixed way of interacting with the world is something we take for granted," said Michael Gurven, UCSB professor of anthropology and the paper's lead author. Gurven is also co-director of the University of New Mexico-based Tsimane Health and Life History Project. "Some people are outgoing and open, others are more quiet and introverted. But from an evolutionary standpoint, it doesn't really make sense that our dispositions differ so much, and are not more flexible.

"Wouldn't it be great to be more extroverted at an important party, more conscientious when you're on the clock at work, less anxious when talking to a potential date?" Gurven continued. "Differences in personality and their relative stability are not unique to humans, and have now been studied in many species, from ants to primates. How could dispositional consistency be favored by selection?"

Given the variability in personality, a question then is how that variability is maintained over time. "If personality traits, like extroversion, help you interact easily with bosses, find potential mates and make lots of friends, then why, over time, aren't we extroverted?" Gurven asked. Successful behavioral strategies with genetic underpinnings –– and behavioral genetics has demonstrated relatively high heritability for personality variation –– often increase in frequency over time, and therefore reduce variation over many generations.

One reason might be that selection pressures vary –– whatever is adaptive today might not be so tomorrow, and what is adaptive in one place might not be so in another. Selection pressures can vary between sexes as well. The most advantageous personality traits for men may not always be so for women. A second reason could be the idea that too much of a good thing is bad. "Being more extroverted might also make you more prone to taking unnecessary risks, which can be dangerous," Gurven said.

Gurven and his team wanted to examine the personality measures they had on the Tsimane adults and determine what consequences might result from one personality over another. "Considering the evolutionary adaptiveness of a trait like personality can be problematic in modern developed societies because of the widespread use of contraception," Gurven explained. "In all animals –– including humans –– the better condition you're in, the more kids you have. And for humans in more traditional environments, like the Tsimane, the higher your status, the better physical condition you're in, the earlier you might marry, and the higher reproductive success you're likely to have."

The Tsimane present a favorable test group because their subsistence ecology is similar to the way people in developed countries lived for millennia. "It's a high fertility population –– the average woman has nine births over her lifetime –– and a ripe kind of population for trying to look at personality," said Gurven.

Based on their measurement of different aspects of personality, the researchers looked at how personality impacted the number of children men and women had. "And what we found was that almost every personality dimension mattered for men, and it mattered a lot," Gurven said. "Being more extroverted, open, agreeable and conscientious –– and less neurotic –– was associated with having more kids."

Interestingly, though, Gurven added, the same was not true for women. "But that wasn't the whole story. Because we had a large number of test subjects, we could look at whether the relationship between personality and reproduction varied across different regions of the Tsimane territory," he said. Some Tsimane choose to live close to town, near roads, schools and the various opportunities that accompany the more urban life, while others live in the remote headwaters, and still others live in remote forest villages where they're often isolated during much of the rainy season.

Only among women living in villages near town did personality associate with higher fertility, Gurven noted. In more remote regions, the same personality profile had

the opposite effect or, in some cases, no effect on fertility. For men, however, location made no difference. Wherever they lived, manifesting traits related to extroversion, openness and industriousness was associated with higher fertility.

So, if higher fertility was the upside of extroversion and other traits, the researchers wondered what the downside might be. Looking for potential costs related to these personality traits that associate with higher fertility, they focused on health and conflicts. Neither, they discovered, really seemed to be an issue.

"You might think that folks putting themselves out there all the time would be getting sick more often because of greater pathogen exposure or from taking risks," Gurven said. "But we didn't find much evidence that they were sicker. If anything, they were consistently healthier. Which actually makes sense when you consider that of people who are in good condition in general are both healthier and more likely to be outgoing."

Health was assessed two years after the personality measurements so there was no possibility that feeling under the weather meant subjects were more likely to be shy, anxious or dispirited.

Regarding conflicts, the researchers did find that the more extroverted and open men got in trouble more often. "They did have more conflicts," Gurven noted. "But most were verbal." And while conflicts can sometimes escalate into physical confrontation, he added, for the most part, they don't result in death.

The researchers found no evidence that intermediary levels of extroversion or other personality traits lead to highest fertility. Instead, greater levels of these traits associate with higher reproductive fitness, consistent with the evolutionary model referred to as directional selection. But personality varied widely between the sexes –– men scored higher on extroversion, agreableness, conscientiousness, openness, prosociality and industriousness.

"That the relationship between personality and fitness varies by sex and geographical region supports the view that fluctuating selection pressures may help maintain variation in personality," said Gurven. "Selection pressures may vary over time as well. Indeed, the environment Tsimane face today may be somewhat novel. The annual growth rate of the Tsimane population over the last several decades is almost four percent –– meaning the population doubles every 17 years –– which suggests pioneer-like conditions. Greater market access, schooling and other opportunities are producing further changes in Tsimane society." 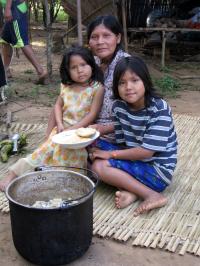 A Tsimane Mother and her Children