NEW YORK -- Columbia scientists have identified a brain circuit that drives fruit flies' ability to see in color -- and found that it bears a striking resemblance to the circuitry behind our own capacity for color vision. These findings shed light on the fundamental, yet mysterious, process by which information about light waves is transmitted from the eye to the brain. This research will not only fuel new investigations into how color vision works in flies and humans, but could also spur efforts to develop algorithms that help computers see in color.

This study was published today in Current Biology.

"The brain can recognize over a million different colors, an astounding power that we are only just beginning to understand," said Rudy Behnia, PhD, a principal investigator at Columbia's Mortimer B. Zuckerman Mind Brain Behavior Institute and the paper's senior author. "With today's study, we pinpointed a circuit of nerve cells that act as a color synthesizer for the fly's brain. This discovery is so exciting because such a similar system appears to be at work in the human brain. As we delve deeper into the fruit fly brain, we are discovering more about our own ability to see and process color."

In both flies and humans, color vision starts with the eye, which contains specialized nerve cells called photoreceptors. These color-sensitive cells line the retina on the back of the eye. Most people (except, for example, those with color blindness) have three types of photoreceptors for color vision. Fruit flies have four. In all animals, each photoreceptor type is sensitive to a particular range of wavelengths of light. Light hitting the photoreceptors triggers a series of electrical signals that are sent into the brain.

"We know that the brain compares these electrical signals from the different photoreceptors, ultimately translating them into color, but precisely how this happens has remained elusive," said Dr. Behnia, who is also an assistant professor of neuroscience at Columbia's Vagelos College of Physicians and Surgeons. "Thanks to recent advances in molecular and imaging technology, we can now view nerve cells across different areas of the fly's brain in exquisite detail."

The small size and relative simplicity of the fruit fly brain make it an ideal organism to investigate color vision. The organization and structure of its brain are also well documented, thanks to initiatives like the Fly Connectome Project at Janelia Research Campus, which has mapped the location and connections of every cell in the fly brain.

For today's Zuckerman Institute study, Sarah Heath, a doctoral candidate in the Behnia lab and the paper's co-first author, recorded the activity of the fruit fly's photoreceptors, one at a time, while the fly looked at different colored LED sources.

Each photoreceptor had long branches, called axons, that extended into the fly's optic lobe, the brain area responsible for vision. These axons communicated with each other, sending information back and forth about the signals they were transmitting. As the researchers traced each signal's path, they found that these paths led to a type of nerve cell called Dm9.

"We think Dm9 serves as a synthesizer, a place for each photoreceptor signal to be compared to each other," said Dr. Behnia.

This comparison is important. Decades of experiments have shown that signals from just one photoreceptor are not enough for the brain to identify a color. This is why people lacking one or more type of photoreceptor have varying degrees of color blindness.

"Each photoreceptor signal must be quantitively compared and analyzed by the brain for the correct color to be identified," Dr. Behnia continued. "And our work has shown that Dm9 may in fact serve that role."

Using this newly collected data as well as data from the Fly Connectome Project, Matthias Christenson, a co-first author on this paper and doctoral candidate in the Behnia lab, developed a computational model of the fly's color circuit. This model could help scientists predict how flies behave in response to different colors -- filling in the many holes in our understanding of the visual system.

Christenson hopes that a better understanding of how the brain perceives color could also lead to new computer-based technologies for those with vision impairments.

"Today's systems struggle to sort out the panoply of hues that we experience every day," said Christenson. "As we continue to uncover the mechanisms behind color processing, one could foresee vision algorithms that improve the way computers recognize different colors."

This research also revealed an unexpected connection to people. For example, the team found that photoreceptors in the fly actually behave similarly to those in humans.

"Dm9 cells bear a striking resemblance in structure, organization and function to nerve cells in the human visual system called horizontal cells," said Heath. "This likeness could be the result of convergent evolution, a phenomenon in which two evolutionary distinct species -- in this case, flies and people -- evolve the same solution to a common problem."

These and future insights the team uncovers in flies could be used to as a starting point to better understand the human visual system.

"The more we learn about how flies experience the world around them, the more commonality we find to ourselves," Dr. Behnia said. "This makes the fly incredibly informative for answering some of biology's oldest questions." 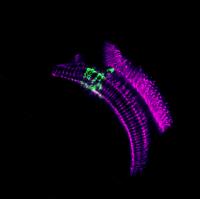