Remember the Star Wars scene in which R2D2 projects a three-dimensional image of a troubled Princess Leia delivering a call for help to Luke Skywalker and his allies? What used to be science fiction is now close to becoming reality thanks to a breakthrough in 3D holographic imaging technology developed at the University of Arizona College of Optical Sciences.

A team led by optical sciences professor Nasser Peyghambarian developed a new type of holographic telepresence that allows the projection of a three-dimensional, moving image without the need for special eyewear such as 3D glasses or other auxiliary devices. The technology is likely to take applications ranging from telemedicine, advertising, updatable 3D maps and entertainment to a new level.

The journal Nature chose the technology to feature on the cover of its Nov. 4 issue.

"Holographic telepresence means we can record a three-dimensional image in one location and show it in another location, in real-time, anywhere in the world," said Peyghambarian, who led the research effort.

"Holographic stereography has been capable of providing excellent resolution and depth reproduction on large-scale 3D static images," the authors wrote, "but has been missing dynamic updating capability until now."

"At the heart of the system is a screen made from a novel photorefractive material, capable of refreshing holograms every two seconds, making it the first to achieve a speed that can be described as quasi-real-time," said Pierre-Alexandre Blanche, an assistant research professor in the UA College of Optical Sciences and lead author of the Nature paper.

The prototype device uses a 10-inch screen, but Peyghambarian's group is already successfully testing a much larger version with a 17-inch screen. The image is recorded using an array of regular cameras, each of which views the object from a different perspective. The more cameras that are used, the more refined the final holographic presentation will appear.

That information is then encoded onto a fast-pulsed laser beam, which interferes with another beam that serves as a reference. The resulting interference pattern is written into the photorefractive polymer, creating and storing the image. Each laser pulse records an individual "hogel" in the polymer. A hogel (short for holographic pixel) is the three-dimensional version of a pixel, the basic units that make up the picture.

The hologram fades away by natural dark decay after a couple of minutes or seconds depending on experimental parameters. Or it can be erased by recording a new 3D image, creating a new diffraction structure and deleting the old pattern.

Peyghambarian explained: "Let's say I want to give a presentation in New York. All I need is an array of cameras here in my Tucson office and a fast Internet connection. At the other end, in New York, there would be the 3D display using our laser system. Everything is fully automated and controlled by computer. As the image signals are transmitted, the lasers inscribe them into the screen and render them into a three-dimensional projection of me speaking."

The overall recording setup is insensitive to vibration because of the short pulse duration and therefore suited for industrial environment applications without any special need for vibration, noise or temperature control.

One of the system's major hallmarks never achieved before is what Peyghambarian's group calls full parallax: "As you move your head left and right or up and down, you see different perspectives. This makes for a very life-like image. Humans are used to seeing things in 3D."

The work is a result of a collaboration between the UA and Nitto Denko Technical, or NDT, a company in Oceanside, Calif. NDT provided the polymer sample and media preparation. "We have made major advances in photorefractive polymer film fabrication that allow for the very interesting 3D images obtained in our upcoming Nature article," said, Michiharu Yamamoto, vice president at NDT and co-author of the paper.

Potential applications of holographic telepresence include advertising, updatable 3D maps and entertainment. Telemedicine is another potential application: "Surgeons at different locations around the world can observe in 3D, in real time, and participate in the surgical procedure," the authors wrote.

The system is a major advance over computer-generated holograms, which place high demands on computing power and take too long to be generated to be practical for any real-time applications.

Currently, the telepresence system can present in one color only, but Peyghambarian and his team have already demonstrated multi-color 3D display devices capable of writing images at a faster refresh rate, approaching the smooth transitions of images on a TV screen. These devices could be incorporated into a telepresence set-up in near future.

A video featuring this research will be available here: http://www.uanews.org/node/35109

Please note that this URL is not active yet, but will be once the embargo has lifted.

TV editors: For B-Roll, please contact Daniel Stolte, The University of Arizona, Office of Communications, at 520-626-4402 or stolte@email.arizona.edu

The research was funded through grants from the Air Force Office of Scientific Research, the Defense Advanced Research Projects Agency and the National Science Foundation's Engineering Research Center on Integrated Access Networks. 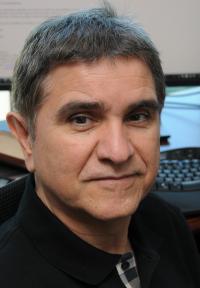 Nasser Peyghambarian, University of Arizona (2 of 2)