Smaller, faster, more energy-efficient - this is the goal that developers of electronic devices have been working towards for years. In order to be able to miniaturize individual components of mobile phones or computers for example, magnetic waves are currently regarded as promising alternatives to conventional data transmission functioning by means of electric currents. The reason: As chips become smaller and smaller, electrical data transmission at some point reaches its limits, because electrons that are very close to each other give off a lot of heat - which can lead to a disruption of physical processes.

High-frequency magnetic waves, by contrast, can propagate in even the smallest nanostructures and thus transmit and process information. The physical basis for this is the so-called spin of electrons in the magnetic material, which can be simplified as a rotation of the electron around its own axis. However, spin waves in microelectronics have so far only been of limited use, due to the so-called damping, which acts on the spin waves and weakens them.

Physicists at the University of Münster (Germany) have now developed a new approach that eliminates unwanted damping and makes it easier to use spin waves. "Our results show a new way for the application of efficient spin-driven components," says Dr. Vladislav Demidov, the head of the study (Institute for Applied Physics, Research Group Demokritov). The new approach may be relevant for future developments in microelectronics, but also for further research into quantum technologies and novel computer processes. The study was published in the journal "Nature Communications".

Magnonics is the name of the research field in which scientists study electron spins and their waves in magnetic materials. The term is derived from the particles of magnetism, which are called magnons corresponding to spin waves.

The best way to electronically compensate the disturbing damping of spin waves is the so-called spin Hall effect, which was discovered a few years ago. The electrons in a spin current are deflected sideways depending on the orientation of their spin, which makes it possible to efficiently generate and control spin waves in magnetic nano-devices. However, so-called nonlinear effects in the oscillations lead to the spin Hall effect not working properly in practical applications - one reason why scientists have not yet been able to realize damping-free spin waves.

In their experiment, the scientists placed magnetic disks made of permalloy or cobalt and nickel, just a few nanometers thick, on a thin layer of platinum. So-called magnetic anisotropies acted on the interfaces of the different materials, which means that the magnetization took place in a given direction. By balancing the anisotropies of the different layers, the researchers were able to efficiently suppress the unfavorable nonlinear damping and thus achieve coherent spin waves - i.e. waves whose frequency and waveform are the same and which therefore have a fixed phase difference. This enabled the scientists to achieve complete damping compensation in the magnet system, allowing the waves to propagate spatially.

The scientists expect that their new approach will have a significant impact on future developments in magnonics and spintronics. "Our findings open a route for the implementation of spin-Hall oscillators capable of generating microwave signals with technologically relevant power levels and coherence," stresses Boris Divinskiy, a PhD student at the Institute for Nonlinear Magnetic Dynamics at Münster University and first author of the study. 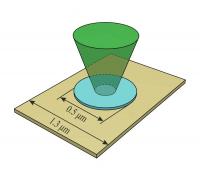 Layout of the Experiment