Analysis of chromosome number variation among species of a North American group of prickly pear cacti (nopales) showed that the most widespread species encountered are of hybrid origin. Those widespread species likely originated from hybridization among closely related parental species from western and southeastern North America. This study was published in the open access journal Comparative Cytogenetics.

The prickly pear cacti (of the genus Opuntia) are endemic to the Americas. The genus is well known for the taxonomic difficulties it poses, as a result of hybridization and morphological variation, as well as lack of intense study. Studies of chromosomal differences among species have been beneficial with regards to recognition and determination of hybrid origins of many taxa. Those studies of the differences in chromosome number have shown that a majority of species of the genus have undergone genome duplication (also known as polyploidy).

This study suggests that a group of well-known prickly pear species occurring primarily in the United States are mostly derived from hybridization and genome duplication, which occurred as a result of the genetic separation of closely related parent species through habitat fragmentation during different times of the Pleistocene. Those closely related species, which were restricted to the southern United States, after thousands of years of separation, came back in contact and formed the common hybrids in the group, which in turn became dominant and more successful in distribution over their progenitors. Their progenitors remained confined to the southern part of their distribution likely as a result of their non-adaptability to adverse environmental conditions, which hybrid taxa were more than able to cope with. This scenario results in the distribution pattern of species that we see today.

This study underscores that genome duplication has had an important effect on the evolution of prickly pear cacti and that understanding patterns in chromosome numbers can be used, in part, to infer the historical biogeography of certain plant groups. 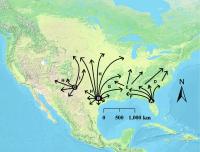