Fungi are a potential goldmine for the production of pharmaceuticals. This is shown by researchers at Chalmers University of Technology, who have developed a method for finding new antibiotics from nature's own resources. The findings - which could prove very useful in the battle against antibiotic resistance - were recently published in the journal, Nature Microbiology.

Antibiotics have saved millions of lives since they were discovered in the 1940s. But recently we've had to learn a new term: antibiotic resistance. More and more bacteria are developing their own protection against antibiotics, thereby becoming resistant to treatment. This will lead to simple infections becoming lethal once again. Our need for new antibiotics is urgent.

The first antibiotic to be mass-produced was penicillin, derived from Penicillium fungi. In their quest for new antibiotics, Chalmers researchers sequenced the genomes of nine different types of Penicillium species. And the findings are amazing:

"We found that the fungi have enormous, previously untapped, potential for the production of new antibiotics and other bioactive compounds, such as cancer medicines," says Jens Christian Nielsen, a PhD student at the Department of Biology and Biological Engineering.

He works in a research team led by another Chalmers researcher with almost the same name: Professor Jens Nielsen.

In the study, recently published in the journal, Nature Microbiology, the research group scanned the genomes of 24 different kinds of fungi to find genes responsible for the production of various bioactive compounds, like antibiotics. More than 1000 pathways were discovered, showing immense potential for fungi to produce a large variety of natural and bioactive chemicals that could be used as pharmaceuticals.

In about 90 cases, the researchers were able to predict the chemical products of the pathways. As evidence of this, they followed the production of the antibiotic, yanuthone, and identified new fungi able to produce the compound, but also that some species could produce a new version of the drug.

All in all, the study shows vast potential for fungi, not only in producing new antibiotics but also in enabling more efficient production of existing ones - and maybe also more effective versions of the existing ones.

"It's important to find new antibiotics in order to give physicians a broad palette of antibiotics, existing ones as well as new ones, to use in treatment. This will make it harder for bacteria to develop resistance," explains Jens Christian Nielsen.

"Previous efforts to find new antibiotics have mainly focused on bacteria. Fungi have been hard to study - we know very little of what they can do - but we do know that they develop bioactive substances naturally, as a way to protect themselves and survive in a competitive environment. This made it logical to apply our research tools to fungi."

Researchers now have various paths to follow. One way of moving forward could be to look further at the production of the new yanuthone compound. The Chalmers researchers have also drawn up a map that makes it possible to compare hundreds of genes in the continuous evaluation of bioactive products with potent drugs in sight.

How long it would take to launch new antibiotics on the market is impossible to say.

"Governments need to act. The pharmaceutical industry doesn't want to spend money on new antibiotics, it's not lucrative. This is why our governments have to step in and, for instance, support clinical studies. Their support would make it easier to reach the market, especially for smaller companies. This could fuel production," says Jens Christian Nielsen. 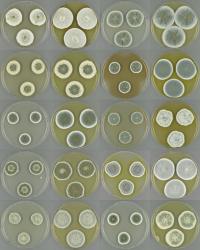