Annapolis, MD; September 21, 2017--Three-quarters of counties in the contiguous United States present suitable environmental conditions for at least part of the year for either Aedes aegypti or Aedes albopictus mosquitoes to survive if introduced, according to researchers at the U.S. Centers for Disease Control and Prevention. The two mosquito species can transmit viruses that cause Zika, dengue, chikungunya, and yellow fever.

The new study, which analyzed existing county-level records of mosquito presence to model a more complete potential range, shows suitability for Ae. aegypti in 71 percent of counties, in a range that covers much of the eastern United States south of the Great Lakes, as well as parts of several southwestern states. The study deemed about 75 percent of counties suitable for Ae. albopictus, in a range that reaches further into the northeast but is more limited in the southwest. Predictive models generated the updated maps using mosquito records from individual counties published earlier this year. The maps are published in a new report in the Journal of Medical Entomology.

"These maps show CDC's best estimate of the potential range of Ae. aegypti and Ae. albopictus," says Rebecca Eisen, Ph.D., research biologist with CDC's Division of Vector-Borne Diseases and senior author of the study. "In other words, these maps show areas where CDC predicts Ae. aegypti and Ae. albopictus mosquitoes could survive and reproduce if introduced to an area during the months when mosquitoes are locally active."

Eisen and her colleagues caution, however, that the maps do not show mosquito abundance or risk of virus transmission. Also, pockets of "microhabitats" within a county could vary in suitability for mosquitoes compared to the average conditions of the county as a whole--warmer urban settings, for instance, may still be suitable for the two Aedes species in some counties not identified as such in the study.

CDC's model found temperature to be the strongest factor in deeming a county environmentally suitable for the two Aedes species. Mosquitoes, like all insects, require warmth for development, and the analysis showed mild temperatures in winter months to be a significant indicator of the cumulative warmth mosquitoes need to become established. The likelihood of a county being considered suitable for either species increased if the average winter conditions there had at least one day with an average temperature exceeding 10 degrees Celsius (50 degrees Fahrenheit) during the winter months (December through February). However, consistently cold winter temperatures reduce the likelihood of eggs surviving the winter, especially for Ae. aegypti, according to Eisen.

For Ae. albopictus, precipitation is also a strong factor in an area's suitability, as the species has been found to rely more on water sources filled by rain for egg laying than Ae. aegypti, which has a comparatively higher propensity to use standing water created by human action. Eisen says this may explain why the Ae. albopictus range is greater in the eastern United States and lesser in the arid southwest.

Earlier this year, CDC published a report that collected county-level surveillance records for Ae. aegypti and Ae. albopictus mosquitoes from 1995 to 2016. The new analysis combined those records with historical surveillance records going back to 1960 and with county-level climate data going back through 1980. Computer-aided statistical analysis of the data generated a model for identifying counties likely suitable for the two mosquito species. The resulting maps will aid mosquito control and public health professionals.

"Surveillance efforts can be focused in counties where Ae. aegypti and Ae. albopictus could survive and reproduce if introduced to an area during the months when mosquitoes are locally active or at least survive during summer months if introduced," Eisen says. "Additionally, the maps can help healthcare providers and the public understand where these types of mosquitoes could be found so that they can take steps to protect against mosquito bites and possible infection."

CDC offers tips for protection against mosquitoes and the viruses they spread:

"Modeling the environmental suitability for Aedes (Stegomyia) aegypti and Aedes (Stegomyia) albopictus (Diptera: Culicidae) in the contiguous United States" will be published online on September 21 in the Journal of Medical Entomology. Journalists may request advance copies of the article via the contact below.

ABOUT: ESA is the largest organization in the world serving the professional and scientific needs of entomologists and people in related disciplines. Founded in 1889, ESA today has over 6,000 members affiliated with educational institutions, health agencies, private industry, and government. Headquartered in Annapolis, Maryland, the Society stands ready as a non-partisan scientific and educational resource for all insect-related topics. For more information, visit http://www.entsoc.org. 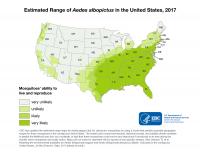 Estimated Range of Aedes albopictus in the United States, 2017