On February 28, 2007, harsh winds blew 10 train cars off a track running near China's Hami basin, killing three passengers and seriously injuring two others. Hurricane-force gusts of 75 mph or more scour this basin every 15-20 days or so, on average, and can reach maximum speeds of more than 120 mph. A study published last week in Nature Communications has documented a new feedback loop that may have helped to make this basin in the Gobi Desert one of the windiest places in China.

"It's an odd-looking environment because it's covered by these dark-colored gravels," explained lead author Jordan Abell. "It's really hot, and can be extremely windy. Our team wondered if the surface plays any role in these extreme conditions." Abell is a graduate student at Columbia University's Lamont-Doherty Earth Observatory and the Department of Earth and Environmental Sciences. His advisor is Lamont-Doherty geochemist Gisela Winckler, also a co-author on the paper.

The Hami basin may once have been covered in a fine, light-colored sediment, similar to California's Death Valley. Within the past 3 million years, however, strong winds carried away those fine sediments, leaving behind a sea of gray and black rocks.

Using a weather and forecasting model, Abell and his colleagues studied how this change from light to dark landscape affected wind speeds in the basin. By absorbing more sunlight, the darker stones exposed by wind erosion heated up the air within the depression. The team found that the resulting differences in temperature between the depression and the surrounding mountains increased wind speeds by up to 25 percent. In addition, the amount of time the area experiences high wind speeds increased by 30 to 40 percent.

Thus, by changing how much sunlight the ground absorbs, wind erosion appears to have exacerbated wind speeds in this region. It's the first time this positive feedback loop has been described and quantified, said Abell.

But it's probably not the only example of its kind. The researchers think this interaction may have helped to shape other stony deserts in Australia, Iran, and perhaps even on Mars.

Understanding this relationship between landscape changes, albedo, and wind erosion may help to make climate simulations more accurate for both the past and future.

Climate models typically do not account for changes in the reflectance of landscapes other than those caused by ice and vegetation. They also tend to assume arid landscapes remain unchanged over time. That could be problematic in some cases, said Abell.

"If you wanted to calculate the wind or atmospheric circulation in this area 100,000 years ago, you would need to consider the change in the surface geology, or else you could be incorrect by 20 or 30 percent," he said.

He added that the newly discovered relationship could also help to accurately model how other landscape changes, such as urbanization and desertification, influence atmospheric patterns by changing the reflectance of the earth's surface.

Other authors on the paper include: Lucas Gloege from Columbia University's Lamont-Doherty Earth Observatory and the Department of Earth and Environmental Sciences; Alex Pullen and Andrew Metcalf of Clemson University; Zachary Lebo of the University of Wyoming; Paul Kapp of the University of Arizona; and Junsheng Nie of Lanzhou University. 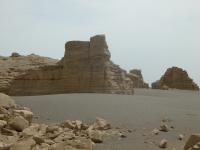