If the price of oil decreases, carbon dioxide emissions increase. This is what two Spanish scientists claim after comparing the relationship between air pollution and economic development by using the real oil prices in Spain between 1874 and 2011 as an indicator. The scientists suggest a need to design new energy taxes.

In the 1970s, the first environmental movements warned that air pollution was the result of our production and consumption patterns. At that point in time, economists argued that an improvement in per capita income would reduce the level of environmental degradation -- a relationship called the Environmental Kuznets Curve (with an inverted 'U' shape). Later studies would go on to show that they were right.

"Although the level of contamination rises during the first stages of a country's economic development, it then starts to decrease as basic necessities are covered and an increased concern for environmental protection arises," explains Manuel Cantavella to SINC, a researcher at Jaume I University.

In Spain, it was not until the 1980s that the country joined the global campaign for environmental protection. During those years, "the percentage change in CO2 emissions began to drop as Spaniards' real income increased," emphasises the expert in economics.

In order to understand the change in pollution in Spain, Cantavella and Jacint Balaguer, from the same university, have estimated what this curve would look like for their country with regard to emissions of carbon dioxide -- a contaminant that is directly related to climate change-. Their estimate has been published in the journal Ecological Indicators. To empirically compare the relationship between CO2 emissions and economic development, the scientists used the real prices of oil between 1874 and 2011 as an indicator.

"It is well known that an increase in oil prices may lead to a reduction in energy consumption," state the authors, who also add that oil is the second most polluting fuel just behind coal. For this reason, and in light of the fact that Spain has always been a country that is quite dependent on oil, the experts not only included the economic growth curve in their analysis of the effects of CO2 emissions, but also the curve on changes in the consumption of pollutant energy with regard to oil prices.

Given that this data was not available for the entire period of time analysed, the study was based on the fact that Spain had imported the majority of the products made from oil. Therefore, the scientists used the prices from international markets to realistically represent the price variations. This data was gathered from the Statistical Review of World Energy 2013.

The results of the study have revealed that a 1% increase (or decrease) in oil prices has been responsible for a reduction (or rise) in CO2 emissions equal to about 0.4%.

The authors suggested that with the effects of per capita income, there is room to apply specific measures aimed at improving environmental quality.

As a result, "the design of a cautious tax structure that would reduce the overall consumption of fossil fuels and promote the user of cleaner and more efficient energies should be given serious consideration," conclude the authors. 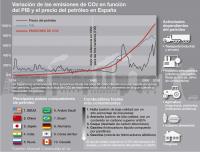