The sprawling Auger Cosmic Ray Observatory in South America has produced its first major discovery while still under construction. The international Auger collaboration has traced the rain of high-energy cosmic rays that continually pelts the Earth to the cores of nearby galaxies, which emit prodigious quantities of energy.

"This is a fundamental discovery," said Nobel laureate James Cronin, the University Professor Emeritus in Physics at the University of Chicago. "The age of cosmic-ray astronomy has arrived. In the next few years, our data will permit us to identify the exact sources of these cosmic rays and how they accelerate these particles."

The Auger collaboration, which includes 370 scientists and engineers from 17 countries, will formally announce its discovery in the Friday, Nov. 9 issue of the journal Science. Ten researchers belong to the University of Chicago contingent of the Auger collaboration, including Cronin and Angela Olinto, Professor in Astronomy & Astrophysics. Cronin initiated the project with Alan Watson of the University of Leeds in the early 1990s.

Until now, the history of astronomical discovery has been dominated by the detection of light. "We are doing astronomy with protons-charged particles," said Joao de Mello Neto, a Visiting Scholar from the University of Rio de Janeiro in Brazil. "We are opening a new window in astronomy."

Cosmic rays-mostly protons-fly through the universe at nearly the speed of light. The most powerful cosmic rays contain more than one hundred million times more energy than the particles produced in the world's most powerful particle accelerator. Fortunately, Earth's atmosphere provides protection against their potentially harmful effects on humans.

Since 1938, when French physicist Pierre Auger discovered cosmic rays, their origin has been a mystery. Now the Auger collaboration has tracked them to Active Galactic Nuclei (AGN). Likely powered by supermassive black holes, AGN shine far brighter than regular galaxies as a byproduct of their gravitationally destructive force.

"After decades of negative results from past experiments, Auger physicists finally find that cosmic rays do not come equally from every direction in space," Olinto said.

Scientists have long considered AGN to be possible sources of high-energy cosmic rays. And while they have now found a strong correlation between the two, exactly what accelerates cosmic rays to such extreme energies remains unknown.

"They are really spectacular objects," said Maximo Ave, a Research Associate at the Kavli Institute for Cosmological Physics at Chicago. "They most likely can be produced only in a place where some very extreme physical process is happening." One such extreme process might be gamma-ray bursts, the possible result of collapsing or colliding stars.

The Chicago group has focused much of its recent attention on the statistical analysis of Auger data.

The numbers are relatively meager, considering that only one high-energy cosmic ray will strike a given square kilometer (less than half a square mile) of Earth approximately once each century.

The Auger collaboration has increased the odds of detection by building an array of detectors that cover 1,200 square miles of the Pampa Amarilla, a vast plain in western Argentina. When complete, the array will consist of 1,600 detectors spaced at one-mile intervals. Ninety percent of the array is now operational.

Each detector consists of a plastic water tank measuring 5- feet tall and 12 feet in diameter. When a cosmic ray collides with an air molecule in Earth's atmosphere, it triggers a shower that multiplies into billions of secondary particles before reaching the ground. When these particles cross from air into water, the speed changes, producing a shock. The shock creates a flash of light that is detected in the dark chamber of the water tank.

Complementing the ground detectors are 24 telescopes that monitor the sky for signs of cosmic rays on clear, moonless nights. The telescopes detect the time emission of fluorescent light that results from the interaction of cosmic rays with nitrogen molecules in the atmosphere.

"We see the event in two different ways, and this is a very powerful way of cross-checking the results," said Vasiliki Pavlidou, Research Associate at the Kavli Institute for Cosmological Physics.

The Science article documents the 27 highest-energy cosmic rays detected by the Auger Observatory from January 2004 to August 2007. When correlated with a catalogue of objects in the sky, their direction of travel matched AGN locations in galaxies no more than 180 million light years distant from Earth and its galaxy, the Milky Way. "These distances correspond to the nearby extragalactic space, the suburbs of the Milky Way, in cosmological terms," Olinto said.

Auger scientists first suspected that they had found an important result a year ago. But to ensure the accuracy of the results, the Auger team set up a strict procedure for analyzing new data as it came in without biasing the outcome.

"Many times, when you look for some statistical significance, you find it because you are looking for it," said Lorenzo Cazon, Associate Fellow at Chicago's Kavli Institute for Cosmological Physics. But now the Auger team has statistically validated their finding.

Said Cronin: "We have taken a big step forward in solving the mystery of the nature and origin of the highest-energy cosmic rays." 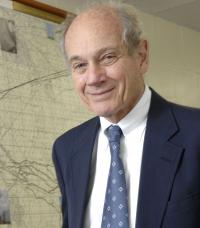