Change in disturbance regimes -- rather than a change in climate -- is largely responsible for altering the composition of Eastern forests, according to a researcher in Penn State's College of Agricultural Sciences.

Forests in the Eastern United States remain in a state of "disequilibrium" stemming from the clear-cutting and large-scale burning that occurred in the late 1800s and early 1900s, contends Marc Abrams, professor of forest ecology and physiology.

Moreover, Abrams noted, since about 1930 -- during the Smokey Bear era -- aggressive forest-fire suppression has had a far greater influence on shifts in dominant tree species than minor differences in temperature.

"Looking at the historical development of Eastern forests, the results of the change in types of disturbances -- both natural and man-caused -- are much more significant than any change in climate," said Abrams, who is the Steimer Professor of Agriculture in the Department of Ecosystem Science and Management.

"Over the last 50 years, most environmental science has focused on the impact of climate change. In some systems, however, climate change impacts have not been as profound as in others. This includes the forest composition of the eastern U.S."

To determine how forest tree species have responded to changes in disturbance regimes, temperature and precipitation over long periods of time, Abrams collaborated with Gregory Nowacki, a scientist with the U.S. Department of Agriculture Forest Service office in Milwaukee, on a study of the tolerance and sensitivity of trees to various factors.

"Many ecological phenomena combine to direct vegetation trends over time, with climate and disturbance playing prominent roles," said Nowacki, who received his Ph.D under Abrams. "To help decipher their relative importance during Euro-American times, we employed a unique approach whereby tree species/genera were partitioned into temperature, shade tolerance and pyrogenicity classes and applied to comparative tree-census data."

The researchers compared presettlement -- original land survey data -- and current vegetation conditions in the eastern United States. Early tree surveys chronicle the westward progression of European land acquisition, with some dating back to the 1600s along the East Coast.

In the research, published online in Global Change Biology, researchers analyzed 190 datasets to determine the relative impacts of climate versus altered disturbance regimes for various biomes across the eastern United States. Because the Euro-American period from 1500 to today spans two major climatic periods -- from the Little Ice Age to the current Anthropocene -- the researchers expected vegetation changes consistent with warming.

"In most cases, however, European disturbance overrode regional climate change," Abrams said. "To the north, intensive and expansive early European disturbance resulted in the ubiquitous loss of conifers and large increases of Acer (maple), Populus (poplar) and Quercus (oak) in northern hardwoods, whereas to the south, these disturbances perpetuated the dominance of oak in central hardwoods."

Maple increases and associated mesophication -- the forest growing increasingly dense, cool, shady and moist in the absence of regular fire -- in oak-pine systems were delayed until mid-20th century fire suppression. This led to significant warm-to-cool shifts in temperature in which cool-adapted sugar maple increased and caused temperature-neutral changes in which warm-adapted red maple increased.

"In both cases, these shifts were attributed to fire suppression rather than climate change," Abrams said. "Because mesophication is ongoing, eastern U.S. forests formed during the catastrophic disturbance era followed by fire suppression will remain in climate disequilibrium into the foreseeable future."

Overall, he concluded, the results of the study suggest that altered disturbance regimes rather than climate had the greatest influence on vegetation composition and dynamics in the eastern United States over multiple centuries.

"Land-use change often trumped or negated the impacts of warming climate, and this needs greater recognition in climate change discussions, scenarios and model interpretations," he said.

The U.S.D.A. Forest Service and Penn State supported this research. 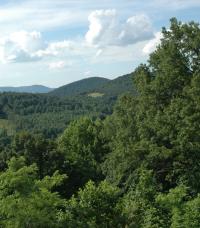