CHICAGO—Anthropologists from Wheaton College (Illinois) and The Field Museum have discovered how the ancient Maya produced an unusual and widely studied blue pigment that was used in offerings, pottery, murals and other contexts across Mesoamerica from about A.D. 300 to 1500.

First identified in 1931, this blue pigment (known as Maya Blue) has puzzled archaeologists, chemists and material scientists for years because of its unusual chemical stability, composition and persistent color in one of the world’s harshest climates.

The anthropologists solved another old mystery, namely the presence of a 14-foot layer of blue precipitate found at the bottom of the Sacred Cenote (a natural well) at Chichén Itzá. This remarkably thick blue layer was discovered at the beginning of the 20th century when the well was dredged.

Chichén Itzá, one of the Seven Wonders of the Ancient World, is an important pre-Columbian archeological site built by the Maya who lived on what is now the Yucatán Peninsula of Mexico.

The findings from this research will be published online Feb. 26, 2008, by the prestigious British journal Antiquity and will appear in the print version of the quarterly journal to be released in early March.

According to 16th Century textual accounts, blue was the color of sacrifice for the ancient Maya. They painted human beings blue before thrusting them backwards on an altar (see below for image) and cutting their beating heart from their bodies. Human sacrifices were also painted blue before they were thrown into the Sacred Cenote at Chichén Itzá. In addition, blue was used on murals, pottery, copal incense, rubber, wood and other items thrown into the well.

The new research concludes that the sacrificial blue paint found at this site was not just any pigment. Instead, it was the renowned Maya Blue – an important, vivid, virtually indestructible pigment.

Maya Blue is resistant to age, acid, weathering, biodegradation and even modern chemical solvents. It has been called “one of the great technological and artistic achievements of Mesoamerica.”

Scientists have long known that the remarkably stable Maya Blue results from a unique chemical bond between indigo and palygorskite, an unusual clay mineral that, unlike most clay minerals, has long interior channels. Several studies have found that Maya Blue can be created by heating a mixture of palygorskite with a small amount of indigo, but they have not been able to discover how the ancient Maya themselves actually produced the pigment.

The new research shows that at Chichén Itzá the creation of Maya Blue was actually a part of the performance of rituals that took place alongside the Sacred Cenote. Specifically, the indigo and palygorskite were fused together with heat by burning a mixture of copal incense, palygorskite and probably the leaves of the indigo plant. Then the sacrifices were painted blue and thrown into the Sacred Cenote.

“These sacrifices were aimed at placating the rain god Chaak,” said Dean E. Arnold, Professor of Anthropology at Wheaton College, Research Associate at The Field Museum and lead author of the study. “The ritual combination of these three materials, each of which was used for healing, had great symbolic value and ritualistic significance.

“The Maya used indigo, copal incense and palygorskite for medicinal purposes,” Arnold continued. “So, what we have here are three healing elements that were combined with fire during the ritual at the edge of the Sacred Cenote. The result created Maya Blue, symbolic of the healing power of water in an agricultural community.”

Rain was critical to the ancient Maya of northern Yucatan. From January through mid-May there is little rain – so little that the dry season could be described as a seasonal drought. “The offering of three healing elements thus fed Chaak and symbolically brought him into the ritual in the form a bright blue color that hopefully would bring rainfall and allow the corn to grow again,” Arnold said.

One of the keys to solving the mystery of Maya Blue production was a three-footed pottery bowl (Field Museum catalog number 1969.189262; see below for reference to image) containing rarely preserved copal dredged from the Sacred Cenote at Chichén Itzá in 1904 and traded to The Field Museum in the 1930s. Preserved in the copal were fragments of a white substance and blue pigment. Using The Field Museum’s scanning electron microscope, the authors studied these inclusions and found signatures for palygorskite and indigo. From this they concluded that the Maya produced Maya Blue as part of their sacrificial ceremonies.

“This study documents the analytical value of museum collections for resolving long-standing research questions,” said Gary Feinman, Curator of Anthropology at The Field Museum and co-author of the study.

But other knowledge was necessary to understand the significance of the bowl and the hardened copal it contains.

“This study required documentary, ethnographic and experimental research to establish the full context and use of the artifacts,” Feinman said. “Our work emphasizes the potential rewards of scientific work on old museum collections. It also shows that scientific analysis is necessary but not sufficient for understanding museum objects.”

It is this broad knowledge coupled with the scientific analysis that has enabled the scientists to finally – after more than 100 years – explain the thick layer of blue precipitate at the bottom of the Sacred Cenote at Chichén Itzá.

Already knowing that Maya Blue was central to Maya ritualistic sacrifices together with discovering that the pigment was produced right beside the Cenote solved the mystery of the 14-foot layer of blue precipitate: So many sacrifices – from pots to more than 100 human beings – were thrown into the Sacred Cenote that ultimately a layer of the pigment washed off the sacrifices and settled at the bottom of the well. (Although fully formed Maya Blue is extremely durable, it can be washed off with water, especially if there is no binder to help it adhere to the object on which it is placed.)

Other objects in The Field Museum’s collections may reveal more information about Maya Blue, the scientists said. For example, identification of the plant materials on the bottom of the copal incense in other bowls dredged from the Sacred Cenote at Chichén Itzá could reveal which portions of the indigo plant were used to make Maya Blue.

“The Field Museum’s collection was critical in solving this mystery,” Arnold concluded. “This bowl has been in the collection for 75 years yet only now have we been able to use it in discovering the ancient Maya technology of making Maya Blue.”

The other co-authors of this research are Jason Branden from Northwestern University, and Patrick Ryan Williams and J.P. Brown, both from The Field Museum.

The altar on the Temple of the Warriors at Chichén Itzá upon which human sacrifices were made. The altar was painted blue. After human victims were stripped, painted blue, and thrust back down on the altar, their beating hearts were removed.
Photo by Dean E. Arnold, Courtesy of Dean E. Arnold.

This Maya tripod pottery bowl (Field Museum catalog number 1969.189262) containing copal from Chichén Itzá’s Sacred Cenote used for sacrifices provided the clues that resolved the mystery of how the ancient Maya produce Maya Blue and how a 14-foot layer of blue precipitate formed at the bottom of the Sacred Cenote (a natural well). It has been part of The Field Museum’s collections for 75 years.
Photo by John Weinstein; Courtesy of The Field Museum.

The underside of the copal removed from the Maya tripod pottery bowl shows evidence that helped solve mysteries surrounding the ancient production of Maya Blue. Fine blue and white grains were removed for analysis and indicated the presence of Maya Blue and palygorskite, indicating that the pigment was being made near Chichén Itzá’s Sacred Cenote into which the bowl (containing this copal) was thrown.
Photo by Linda Nicholas; Courtesy of The Field Museum. 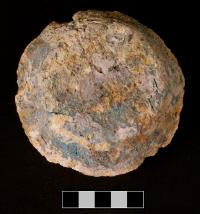