URBANA – Although global grain production must double by 2050 to address rising population and demand, new data from the University of Illinois suggests crop yields will suffer unless new approaches to adapt crop plants to climate change are adopted. Improved agronomic traits responsible for the remarkable increases in yield accomplished during the past 50 years have reached their ceiling for some of the world's most important crops.

"Global change is happening so quickly that its impact on agriculture is taking the world by surprise," said Don Ort, U of I professor of crop sciences and USDA/ARS scientist. "Until recently, we haven't understood the urgency of addressing global change in agriculture."

The need for new technologies to conduct global change research on crops in an open-field environment is holding the commercial sector back from studying issues such as maximizing the elevated carbon dioxide advantage or studying the effects of ozone pollution on crops.

However, U of I's Free Air Concentration Enrichment (FACE) research facility, SoyFACE, is allowing researchers to conduct novel studies using this technology capable of creating environments of the future in an open-field setting.

"If you want to study how global change affects crop production, you need to get out of the greenhouse," Ort said. "At SoyFACE, we can grow and study crops in an open-field environment where carbon dioxide and ozone levels can be raised to mimic future atmospheric conditions without disturbing other interactions."

From an agricultural standpoint, one of the few positive aspects of global change has been the notion that elevated carbon dioxide in the atmosphere will stimulate photosynthesis and result in increased crop yields.

But recent studies show that crops grown in open fields under elevated carbon dioxide levels resulted in only half the yield increase expected and half of what the United Nation's Intergovernmental Panel on Climate Change used in their model predictions regarding the world's food supply in 2050.

"Elevated carbon dioxide is creating a global warming effect that in turn is driving other climate change factors such as precipitation patterns," Ort said. "By 2050, rainfall during the Midwest growing season is projected to drop 30 percent."

U of I researchers are also studying how elevated ozone levels will affect crop yields.

Soybean plants are being evaluated in elevated ozone at SoyFACE. New studies show that yields in the tri-state area of Indiana, Illinois and Iowa have been suppressed by 15 percent due to ozone pollution. Ort said if the same cultivars of soybean are used in 2050 that are being planted now, producers can expect to see an additional 20 percent drop in yield due to expected increases in ozone levels by the middle of the century.

"Ozone is a secondary pollutant caused by the interaction of sunlight with pollution clouds produced in industrialized areas and carried over rural areas by wind," Ort said. "For example, if pollution from Chicago blows out of the city into agricultural areas, it can interact with sunlight to produce ozone and cause plant yields to suffer."

Because ozone is an unstable gas, its concentration levels vary greatly, Ort said. Thus, agricultural areas located near industrial areas will face the greatest challenges. Unfortunately, of the world's two top-growing areas for soybean – the United States faces a much greater ozone challenge than Brazil.

"The SoyFACE experiment and historical data recorded over the past 10 years both indicate that for every additional one part per billion of ozone, soybean yields will decrease 1.5 bushels per acre," Ort said. "We are applying for funding to examine corn's sensitivity to ozone at SoyFACE, but a historical analysis indicates a significant sensitivity and yield loss."

In addition to generating results about the response of crops to global change, SoyFACE has provided proof of concept that adaptation of crop plants to global change can be achieved in the field. Ort believes that this approach can and needs to be scaled to much larger sizes necessary for conventional selective breeding.

Currently, only five FACE research facilities exist in the world. SoyFACE is the largest and most expansive in terms of number of global change factors under investigation. Researchers at SoyFACE are assisting in the development of additional FACE experiments in Brazil, India and Australia.

"FACE technology, coupled with revolutionary genomic tools, can markedly accelerate the breeding cycle," Ort said. "Once we discover the suites of genes that control the optimal response of plants growing in global change conditions, we can screen germplasm collections to narrow down hundreds of thousands of cultivars before testing the best ones in the field."

Ort said top priorities of focus include tropical areas that are already food insecure and areas such as the U.S. Corn Belt that produce a large percentage of the world food supply.

"More research in these areas is critical," he said. "How top-producing areas fare with climate change will be very important in determining global food security for the future."

This research was published in the Annual Review of Plant Biology, Current Opinion in Plant Biology, and Plant Physiology. Researchers include Ort, Stephen Long, and Elizabeth Ainsworth of the U of I, and Xin-Guang Zhu of the Shanghai Institute of Biological Sciences in China. Research was funded by the U.S. Department of Agriculture, the Department of Energy, and the Illinois Council on Food and Agricultural Research. 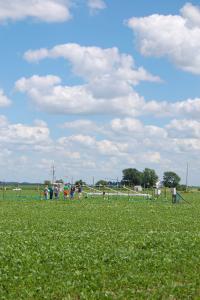