Tropical Storm Andrea formed on the late afternoon of June 5th, 2013 from a trough of low pressure that had persisted for several days over the southeast Gulf of Mexico. This trough extended out over the Gulf from the Yucatan Peninsula and provided the focus for the development of showers and thunderstorms in the region, eventually leading to the formation of Tropical Storm Andrea.

With its suite of passive microwave and active radar sensors, the Tropical Rainfall Measuring Mission or TRMM satellite is ideally suited to measure rainfall from space. TRMM is a joint mission between NASA and the Japanese Space Agency.

For increased coverage, TRMM is used to calibrate rainfall estimates from other additional satellites. The TRMM- based, near-real time Multi-satellite Precipitation Analysis (TMPA) at the NASA Goddard Space Flight Center in Greenbelt, Maryland is used to estimate rainfall over a wide portion of the globe.

At NASA Goddard, the TMPA rainfall totals were calculated for the eastern Gulf and the surrounding region for the period 1-7 June 2013, covering the time before Andrea formed until it was passing through eastern North Carolina. The calculations were mapped on an image at NASA Goddard. The TRMM data showed rainfall totals on the order of 400 to 500 mm (~16 to 20 inches) stretching from the eastern tip of the Yucatan to western Cuba and over the southeast Gulf of Mexico. Upwards of 600 mm (~24 inches) occurred offshore over the Yucatan Straight. There were reports of widespread flooding over western Cuba but no injuries.

As Andrea moved northward up the United States' east coast, it began to accelerate as it transitioned into an extra-tropical system. Because of this, rainfall amounts were significantly lighter. A second image created at NASA Goddard showed TMPA rainfall totals for the eastern U.S. for the same period (June 1 through 7). In general, rainfall amounts along Andrea's track were between 45 and 90 mm (~2 to 4 inches) with locally high amounts from around 100 mm (~4 inches to around 150 mm (~6 inches) over parts of South Carolina, eastern Georgia, and coastal North Carolina. 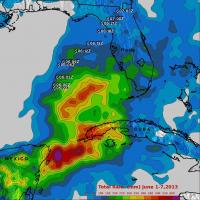