An ancient fish species with unusual scales from the Kuanti Formation in southern China may have evolved prior to the "Age of Fish", according to a study published March 8, 2017 in the open-access journal PLOS ONE by Brian Choo from Flinders University, Australia, and colleagues at the Institute of Vertebrate Paleontology and Paleoanthropology, China.

The Devonian Period (419.2 - 358.9 million years ago) is popularly called the "Age of Fishes" because of the apparent increase in the abundance and variety of jawed fishes when compared with the preceding Silurian Period (443.7 - 419.2 million years ago). Until recently, the Silurian fossil record of jawed vertebrates has been based on highly fragmentary remains, limiting our understanding of their early evolution. Recent discoveries from the Kuanti Formation of Yunnan, southwestern China, have dramatically enhanced our knowledge, with several superbly preserved fish species described in recent years. The fish-bearing sediments of the Kuanti Formation have been dated to the latter part of the Silurian, about 423 million years ago.

Now, Choo and colleagues have described a new genus and species of Kuanti fish, Sparalepis tingi, which represents only the second Silurian bony fish based on more than isolated fragments. This new form, along with its contemporary Guiyu and the slightly more recent Psarolepis, possesses spine-bearing pectoral and pelvic girdles, features once thought to be restricted to the armored placoderm fishes. Sparalepis and its kin may represent an early radiation of stem-sarcopterygians, ancient cousins of modern lungfish, coelacanths and tetrapods.

But Sparalepis also has an unusual scale morphology which distinguishes it from its cousins. The scales are particularly tall, thick and narrow, with the ones at the front having interlocking mechanisms on both the outer and inner surfaces. The closely packed squamation resembles a wall of shields, giving rise to the genus name of Sparalepis, a mixture of ancient Persian and Greek meaning "shield scale".

Sparalepis adds to an ever-growing list of bizarre ancient fishes from the Silurian and earliest Devonian of Yunnan, suggesting that this region may have been an early center of diversification for the jawed vertebrates. The "Age of Fishes" appears to have arrived early during the Silurian of southern China.

In your coverage please use this URL to provide access to the freely available article in PLOS ONE: http://dx.doi.org/10.1371/journal.pone.0170929

Funding: Funding was provided by the National Nature Science Foundation of China (41530102), Chinese Academy of Sciences (QYZDJ-SSW-DQC002; Funds for Paleontology Fieldwork and Fossil Preparation), and Australian Research Council (Discovery Project DE160100247). The funders had no role in study design, data collection and analysis, decision to publish, or preparation of the manuscript. 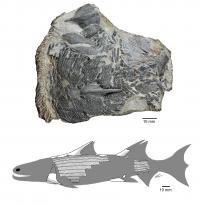